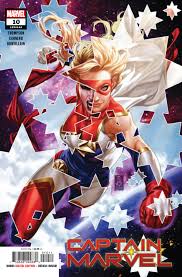 Carol’s powers have been failing her. Meanwhile, a mysterious new hero known only as “Star” has taken her place in the spotlight, especially after her Kree heritage caused some of the public to turn against her. She saves the usually-antagonistic Doctor Minerva – who admits it was her who exposed Carol’s alien heritage as well as orchestrating the virus currently sapping her powers. And on top of that, Carol’s connection to Star is finally revealed.

Seeing the truth about Minerva, Star and Carol’s connection to them both finally come out after a few issues of being teased about it – I can’t say it wasn’t unexpected, but the way it’s presented is certainly satisfying. The next issue is bound to feature a climactic battle between Captain Marvel and Star, and regardless of how predictable that conflict may be, I’m sure it’ll be exciting regardless.