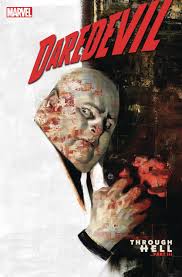 Both Matt Murdock and Wilton Fisk have attempted to break old habits. Both of them have failed. Matt has resumed his ways as Daredevil after saying he’d no longer act as the hero – but found that he couldn’t stay away. Fisk killed a man in a bathroom after being picked on at a party full of socialites. These two men both now have to overcome their fear in order to take the next step, and unfortunately for both of them, other powers are in play that may force them to act before they’re ready.

Daredevil continues to be a wild, raw, wonderful read. This issue in particular, with the parallels it draws between Matt Murdock and Kingpin, really manages to capture the overall tone of this run. But even more than that, the tension it creates as Fisk desperately tries to avoid being caught and as Matt seems ready to don his cowl again is palpable. Whatever’s next for these two, it’s not likely to be positive – but it’s bound to be a solid read nonetheless.