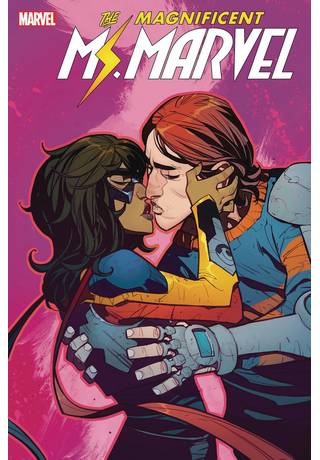 Thanks to her Inhuman abilities, Kamala Khan is able to take down numerous villains and dangers as Ms. Marvel. But she can’t exactly punch away the terminal disease that’s killing her father. Fortunately she has some allies who might be able to help, though, in the likes of Tony Stark and Doctor Strange. The condition that Kalama’s father suffers from is determined to be linked to his own latent Inhuman genes, and Strange agrees to try a procedure that may cure it. But even that doesn’t go as planned when one Mr. Hyde arrives at the hospital and starts wrecking the place.

Kamala usually can’t seem to catch a break, but it looks as though things might work out in her favor this time. Plus, the whole will-they-won’t-they scenario with her and Bruno might finally (finally) be at its end. But this is comics, and there’s always a twist around the corner. Ms. Marvel remains one of my favorite books at Marvel, and this issue has continued the trend of success.