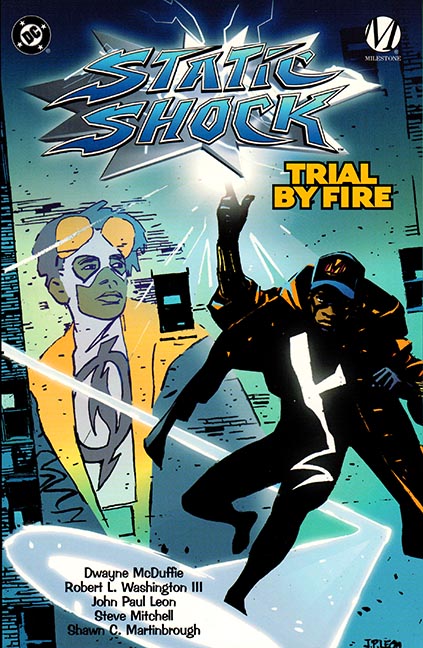 The early days of Static have often been compared favorably in tone to the early Stan Lee-Steve Ditko issues of Amazing Spider-Man, and that comparison is apt. Simply put, there is the same kind of character- and world-building magic going on in these pages. Teenage life and struggles, bullies, popular people, romance, would-be romance, true friends, and plenty of jerks. And a witty, brainy kid with newly acquired powers, just brimming with possibilities.

The stories in this collection introduce Virgil Ovid Hawkins, also known as Static, along with his mother, his sister, Sharon, his beautiful friend, Frieda Goren, a cast of supporting players, and a slew of super villains and would-be super villains.

They were fresh when they debuted in 1993 and they have stood the test of time since then.

Milestone’s Editor-in-Chief Dwayne McDuffie was among the best and brightest comic creators of his generation. Robert Washington III was a young, dynamic writer whose work called out with possibilities. Together as co-writers for Static, they produced what has hung to me for more than 25 years as my personal favorite Milestone stories.

Before Static, I wasn’t familiar with the art of John Paul Leon. Since Static (and Shadow Cabinet), he’s been in my “must have” category, and his career has included brilliant work with high points such as Earth X and Batman: Creature of the Night. His work here crackles with the energy you’d expect with a character who has electricity-based powers.

Not to be overlooked is the coloring by Noelle Giddings. Her color palette was different than anything on the market at the time and its contributions to the distinct look and feel of the Milestone books, particularly Static, are difficult to overstate.

This trade paperback reprints the first four issues of Static from 1993. Like the other collected editions from the Milestone imprint, it’s genuinely scarce and should be expected to sell for north of $100, with prices climbing for the higher grades. You can still occasionally find it priced more accessibly if you really hunt, but the average prices have stayed high for a while now.