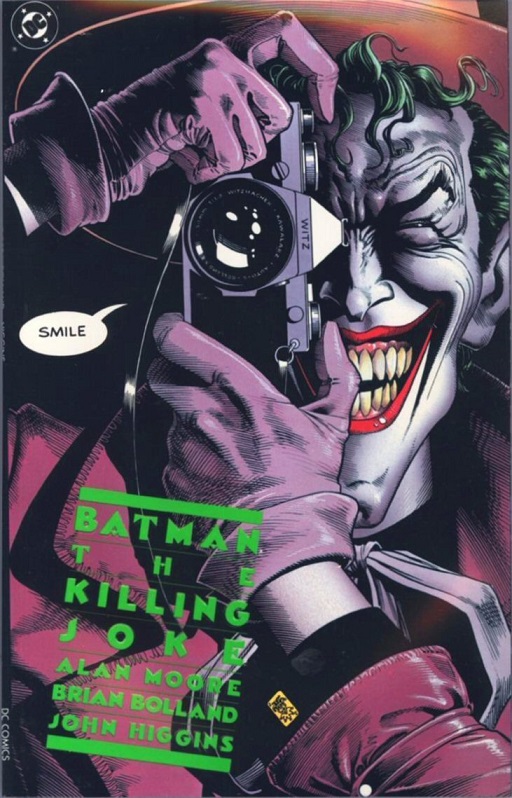 In Batman: The Killing Joke (1988), Alan Moore and Brian Bolland explored Joker’s origin, suggesting that he was a failed comedian who became Red Hood. Having escaped from Arkham, he shows up at Commissioner Gordon’s home and when Barbara, his daughter, answers the door Joker shoots her. What follows is sadistic madness that illustrates the depths of Joker’s depravity and twisted sense of humor.

An exorbitant amount of content is called “groundbreaking” in our media, but this is an example when the superlative is accurate. Having been around since 1940, the Joker had gone through phases that moved with the times. In the ’50s to early ’70s, he was turned from less of a frightening presence to more of a comedic villain. Dennis O’Neil and Neal Adams shifted him back into sinister territory with their 1973 story “Joker’s Five-Way Revenge,” and then came The Killing Joke.

Through The Killing Joke, Moore and Bolland gave us perhaps the most frightening Joker story to date and crafted it through layers of psychosis as opposed to some of the more decadent mature tales of unbridled destruction and violence found in the ‘80s. By attacking Barbara and torturing Commissioner Gordon, Joker is closer and more personal than other supervillains that kill on a larger scale, eliciting uncomfortable realness to the acts. Batman has become such an accomplished hero for Gotham and fearsome foe for its criminals that Joker needed to up the ante and in this book he certainly did.