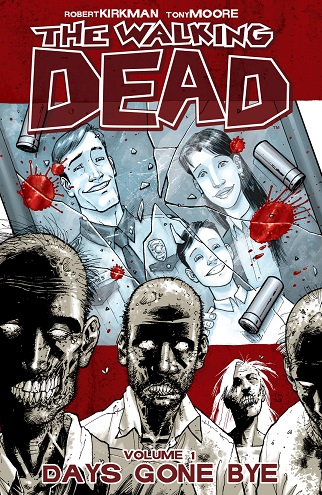 As regular Scoop readers know, during the disruption caused by the COVID-19 virus, we’ve featured reviews of individual back issues, runs, collected editions, and original graphic novels that captured and held our attention over the long haul. Last week marked the return of “new comics Wednesday” for many around the country, but even as we start reviewing new comics once again we’ve decided to continue including great older comics among our features. Remember, once your store is open, checking out their back issue bins is a great way to #BackTheComeback.

I know, this seems obvious – everyone and their mother has heard of The Walking Dead. But, it’s the type of story that can entice and attract non-comic readers, particularly those who are fans of the TV show, those that like horror, and those who appreciate stories that explore psychology and sociology.

Created by Robert Kirkman and Tony Moore, the protagonist of the black and white comic book series is Kentucky Police Deputy Rick Grimes. It opens with Rick getting shot while on duty, then waking up from a coma weeks later to learn that a zombie apocalypse has begun and it appears that he is the last man alive.

That is proven incorrect fairly quickly when he meets fellow survivors Morgan and his son Duane. Miraculously, he even finds his wife and son, Lori and Carl, who have become part of a group of survivors. They are involuntarily nomadic, searching for a home protected from the walkers, and soon learn that the most dangerous foe in the zombie apocalypse is actually other humans.

Zombie stories aren’t exactly new territory. What makes The Walking Dead so interesting is that unlike other zombie apocalypse narratives, it doesn’t end after surviving the first major attack. It continues beyond that point, delving into long-term survival tactics, complications in group dynamics, the changing sociological landscape, psychological damage from extreme violence, balancing the need for survival with a sense of morality, and the blunt fact that the people who will survive the longest are likely the absolute most dangerous. Whether intrinsically or overtly, it makes readers question how far good people can go to survive and protect their loved ones when the world has effectively ended.