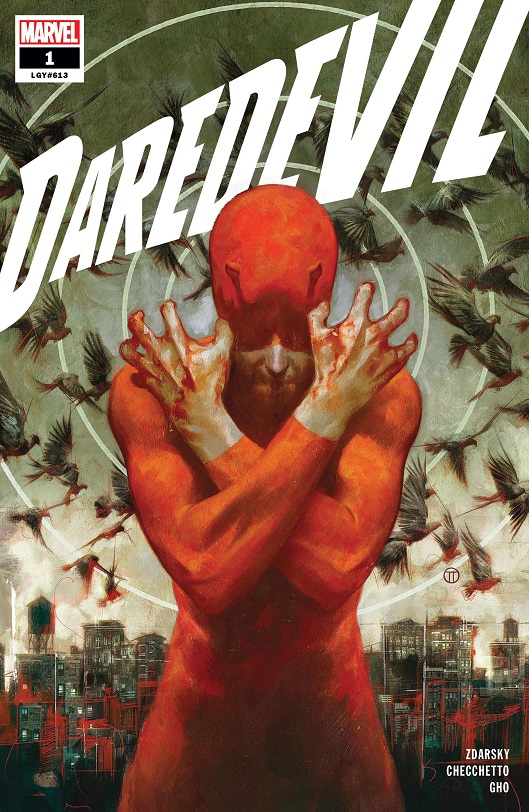 As regular Scoop readers know, during the disruption caused by the COVID-19 virus, we’ve featured reviews of individual back issues, runs, collected editions, and original graphic novels that captured and held our attention over the long haul. Now that “new comics Wednesday” has returned in some form for many around the country, we’ve decided to continue including great older comics among our features. Remember, once your store is open, checking out their back issue bins is a great way to #BackTheComeback.

Daredevil began a new ongoing series in early 2019 and it has sustained solid storytelling and interesting events in every issue. It starts with Matt recovering from physical trauma and trying to get back to being Daredevil. Unfortunately, something tragic happens while he’s on the streets of Hell’s Kitchen that shakes Matt to the point of no longer feeling that he should be Daredevil.

This turn of events inspires copycats to emerge, taking on his mantle to protect the neighborhood. But there are some who aren’t enamored with Daredevil like Detective Cole North, a recent transplant from Chicago with a no-nonsense attitude toward anyone that doesn’t’ follow the law – criminals, vigilantes, or fellow cops.

For his part, Wilson Fisk is trying to turn away from his Kingpin status for more legitimate activities, but natural instincts are hard to quell. Fisk attempts to deal with powermongers in vastly different spheres of influence without using his fists or crime empire.

The current Daredevil run by Chip Zdarsky is so good. Daredevil has always taken issues of spiritual morality seriously and that theme continues here for multiple characters. It is introspective and character driven as Matt wrestlers with dispensing justice or following the law, Fisk’s nature boils dangerously to explosion, and Detective North’s perspective on law and order gets shaken.

This series is written so well and the broody artwork compliments the tone beautifully. Any fan of the Man Without Fear or of stories with morally gray areas should check out this series.