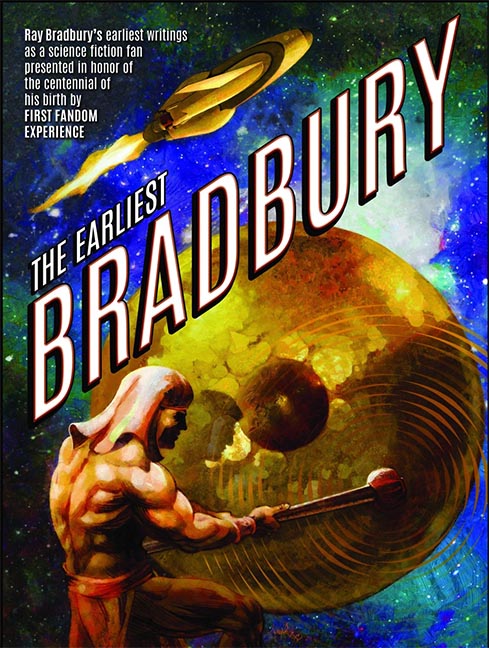 “The ability to fantasize is the ability to survive,” Ray Bradbury said in a 1974 interview with James Day. Even before his passing in 2012, the celebrated author of The Martian Chronicles, Fahrenheit 451, The Illustrated Man, and I Sing the Body Electric was widely and justly recognized as one of the grand masters of science fiction and one of the most important writers of the 20th century. As such, his life, writing, and career has been thoroughly documented, but there has always been at least one component that was if not missing, then seriously under-represented. Until now.

First Fandom Experience, which previously released The Visual History of Science Fiction Fandom, has chosen to celebrate the centennial of Bradbury’s birth with the publication of a unique volume of his earliest writing as a science fiction fan.

The then-budding writer’s formative years on the sci-fi scene are powerfully and painstakingly explored in the lavishly-illustrated new book, The Earliest Bradbury. It seems impossible that any individual or group could assemble such a book, but the proof is in the pages of this tremendous volume.

Once he joined the Los Angeles Science Fiction League (LASFL) in October 1937 at the age of 17, it would be just four months before his first published science fiction story appeared in the January 1938 issue of the club’s publication, Imagination! From there, a cascade of efforts followed.

The oversized hardcover includes meticulous scans of his fanzine work, including his art, and captivating supporting illustrations (and a cover) by Songs of Giants artist Mark Wheatley. Writers and editors David Ritter and Daniel Ritter, and their team at First Fandom Experience, are to be congratulated on this magnificent effort that adds significantly to our understanding of one of our greatest authors.

To order the book, visit firstfandomexperience.org/the-earliest-bradbury.