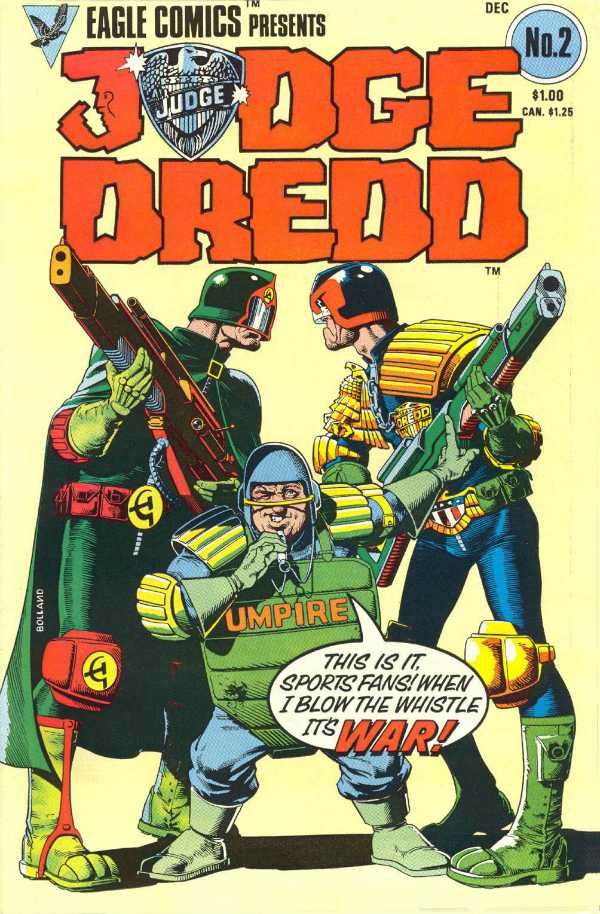 The second Eagle Comics issue of Judge Dredd takes readers to the moon, specifically the colony of Lunar 1, where the political tensions on Earth have clearly extended their entangling reach. U.S. and Soviet tensions run high and contribute significantly to the tales.

The issue includes four complete stories, all of which are full of the prerequisite Judge Dredd hallmark twists and turns, desperate measures, and bombastic action.

Although Eagle Comics only existed from 1983 to 1986, the British publisher created to bring Judge Dredd into the North American comics market succeeded in its primary goal. Many U.S. fans can trace their awareness of the character to the 33 issues of Judge Dredd that the publisher produced (the title switched to Quality Comics with #34).

One of the principle reasons for their initial success and the present increasing popularity as back issues is that Eagle launched with a “best of” approach rather than going chronologically. While a number of artists were featured, the opening salvo spotlighted the work of artist Brian Bolland, and it immediately resonated with readers. Combined with Dredd’s status as an antihero and almost a force unto himself, Bolland’s artwork and the selected stories were highly memorable.