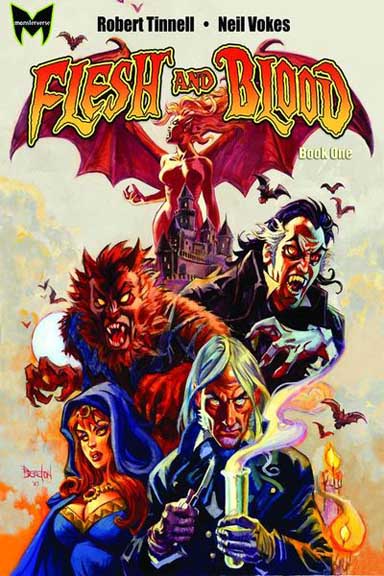 The movie output of the legendary British film company Hammer Studios, which starred the likes of Christopher Lee, Peter Cushing and others, influenced generations of horror fans, and that includes comic book creators like writer Robert Tinnell and artist Neil Vokes, who have collaborated on this graphic novel from Monstervese, the first of four in a series.

Tinnell and Vokes, who previously worked together on the acclaimed Image Comics graphic novels The Black Forest and The Wicked West (and their respective sequels), have pulled out all the stops in recreating the sensibilities of the best Hammer films, but they don’t make the mistake of tripping themselves up with slavish devotion to style over substance.

In this story, the destruction of the legendary, lustful vampire, Carmilla, sets off an epic chain of events that draws together the icons of horror, including most importantly Baron Frankenstein and Dracula.

Flesh and Blood is as much its own entity as an homage to movies of days gone by, and the word has been getting out about it, both in the mainstream press and in comic book circles.

Given our regard for their previous efforts, the quality of this one was no surprise. The scope of the project, though, blew us away. We’re ready for the second installment right now. Bravo, gentlemen!