Ms. Tree: Skeleton In The Closet 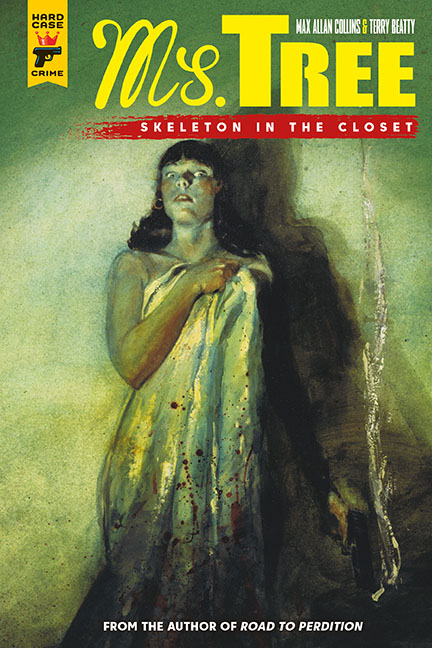 Ms. Tree: Skeleton In The Closet is the new trade paperback collection from writer Max Allan Collins (Road To Perdition) and artist Terry Beatty (Rex Morgan, M.D.) courtesy of Titan’s Hard Case Crime imprint. For those of use who have been anxiously waiting for this volume since the debut of the first one in the series, Ms. Tree: One Bad Mother, it’s about time!

While it still seems odd that these collections have started with the Ms. Tree stories originally published by DC Comics, the last ones in her long run, the five tales collected in this volume are definitely solid representations of the character. As her fans know, Ms. Tree is cut from the same cloth as Mickey Spillane’s Mike Hammer, but she is far more than just a tough guy’s tough girl. She’s her own woman. She is sharp, insightful, hard-nosed, somewhat caustic, and when called for, very deadly.

And in her comic adventures, the deadly aspect of her nature is called for frequently.

Spillane and Collins were close friends in real life, and I’ve always thought it showed. Rather than aping Mike Hammer, Ms. Tree stories have their own twists and turns, their own style. Where the similarities come in is that both characters have a bluntness and willing to do what they believe must be done, even if those decisions are cold, brutal, and calculating.

Finishing Ms. Tree: Skeleton In The Closet, I had the same reaction to when I finished reading Ms. Tree: One Bad Mother: I want more… Now! Here’s hoping that happens soon.