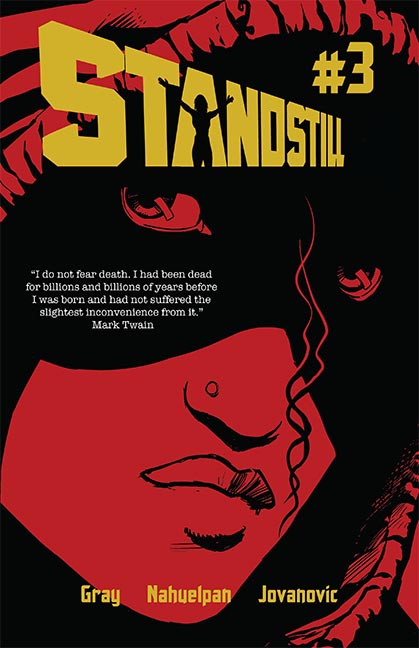 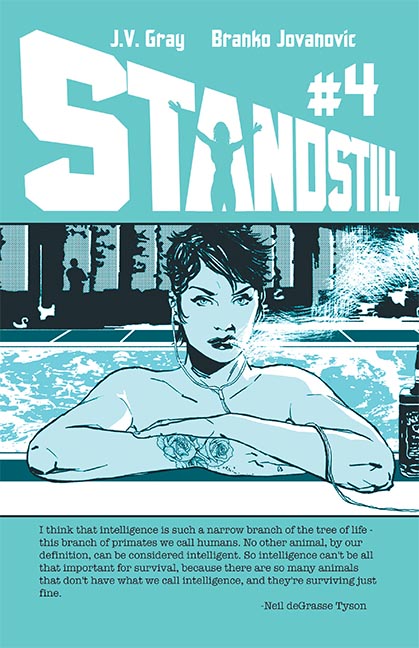 Whether it’s Alzheimer’s or something physical, the dread of being trapped in your own body is fertile ground for a horror story, perhaps the kind that hits too close to home. In 2017, writer Justin Gray introduced readers to Standstill, “…a survival horror comic book about a global pandemic that suddenly and inexplicably brought the world to a stop.”

Some folks, including the main character, Mason, seemed to be physically unaffected by the situation, but the overwhelming number of people just stopped where they were, regardless of what they were doing, due to the unknown disease. As you can imagine, when airplane pilots, truck drivers, firemen, surgeons, and others just become paralyzed in the middle of their daily lives, the results for civilization aren’t great.

Mason and his fiancée, Luna, had gotten engaged the night before “the standstill.” In love, happy, and looking forward to their future, they went to bed. The next morning, Mason woke and Luna did not.

When we met Mason in Standstill #1, they were in Denver, journeying from New York to Oregon, and he was using his medical training to keep her alive. Of course, he had to fight off escaped lions and other craziness that you can expect when the world breaks down.

It was captivating, genuinely gritty stuff aimed at an adult audience (language, sex, violence, despair, you name it). And then after two issues, although Gray had a number of scripts already written, it stopped.

Those who backed the revival with two brand new issues got their money’s worth on these issues. Standstill #3, with art by Amancay Nahuelpan (Justice League Dark) and Branko Jovanovic (The Road Witch), is a flashback to right before the standstill outbreak hit, so we get to know a bit more about Mason. Then Standstill #4, illustrated by Jovanovic, takes us right back into the crisis.

Standstill is a highly compelling horror movie on paper. Even after the lengthy delay between issues, it’s fresh, inventive, and, well, a truly horrifying concept that Gray and his artists effectively get across to the reader. It is without a doubt something that horror fans should seek out. Here’s hoping there are many more issues. And soon.