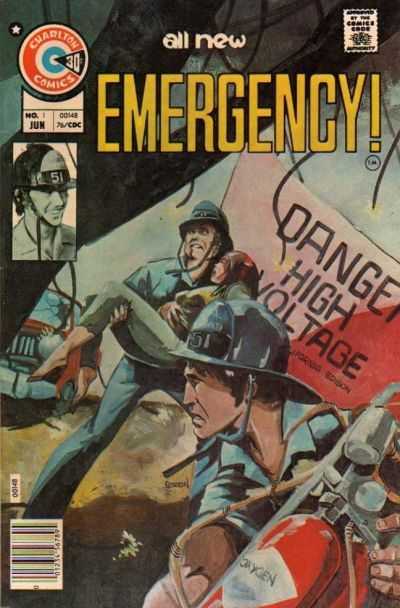 In most larger and many smaller American communities, Emergency Medical Technicians (EMTs) are ubiquitous today, but in 1972, when the TV series Emergency! debuted, they weren’t only new, they were revolutionary.

The series introduced viewers across the nation to the Los Angeles County Fire Department’s paramedic program and truly helped blaze the way for a seismic shift in patient care. Along the way, it also introduced those viewers to the adventures of paramedics Johnny Gage and Roy DeSoto, Dr. Kelly Brackett and Nurse Dixie McCall, among others.

At the height of the show’s popularity – or more likely just after its pinnacle, Charlton launched both a black and white magazine and a color comic based on the series. The color comic debuted with a June 1976 cover-dated issue that featured a cover by Joe Staton, a story by the reliable Joe Gill, and early interior art by John Byrne.

While the finished product lacks the power of Neal Adams’ art on the B&W magazine, it still showcases Bryne’s skills as he was on the rise and makes for an intriguing counterpoint to the superhero material for which most fans know him. Those familiar with the TV series will recognize the familiar characters and story elements, too.