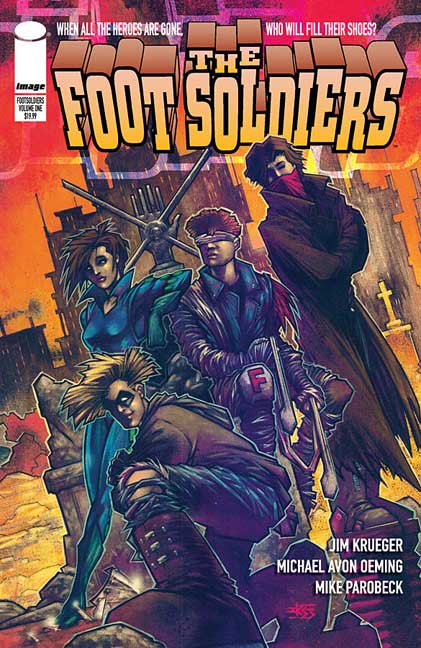 Writer Jim Krueger has always thought big. His epic Justice at DC with artist Alex Ross represented the age of heroes. His even more epic Earth X at Marvel represented their twilight battle. Sometimes forgotten, though, was the story he told first. What came after the last battle? What happened to a world in which all the heroes were gone? Would anyone ever come along to fill their shoes?

The Foot Soldiers, which was first published by Dark Horse in 1996, began answering that question. In a bleak, desperate and foreboding future, a small group of heroes challenged the misery of the status quo. They themselves were far from perfect, but they were nearly perfect vehicles for Krueger and artist Michael Avon Oeming to work their magic. The power of the material contained in this collected edition is what first made us realize Krueger’s unassuming, almost impossibly cool storytelling abilities – incredibly epic and personal at the same time – and let us witness Oeming right before he became the Mike Oeming of Powers fame.

This volume is very nicely recolored and it includes a great cache of bonus material such as the late Mike Parobeck’s previously unpublished Foot Soldiers work, a sterling cover by John K. Snyder III, and the original mini-series covers by Alex Ross, Walter Simonson, Tim Sale, and Snyder.

If you’re never sampled this particular chapter of Krueger’s career – or even if you have – this one gets our highest recommendation.