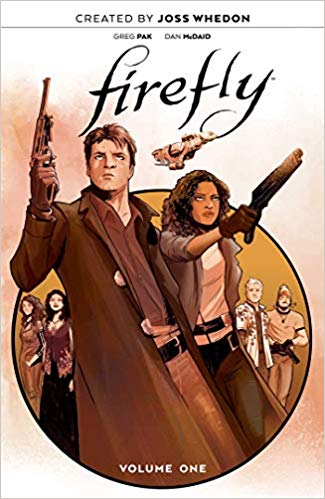 Firefly debuts at its new home of BOOM! Studios, presenting the backstory on the Unification War. The first volume is standard Firefly: the crew take a job escorting pilgrims through a dangerous territory. This puts them at odds with local thieves and scoundrels that patrol the area for easy targets to rob. While on the job, Mal and Zoë are spotted and their location is turned in to Boss Moon and the Unificators who have been hunting down the remaining Browncoats that have been deemed war criminals. The core cast are then split into small factions and solo as the conflict with the Unificators escalates, new alliances form, and loyal Browncoats smell the opportunity for another battle.

Greg Pak’s take on Firefly has been the best of Joss Whedon’s properties since their move to BOOM! Studios. He has nailed down the characters voices and quirks, providing the speech styles, jokes, and foibles that harken back to the short-lived cult classic TV show. The first volume reads like an episode of the show with all hell breaking loose, but the second arc really hits a good stride. Firefly has always worked because it’s focused on the small cast, yet in the larger story, readers still get the intimate family aspects of the crew with a tale about the ugliness of war and how enemies can often have things in common.