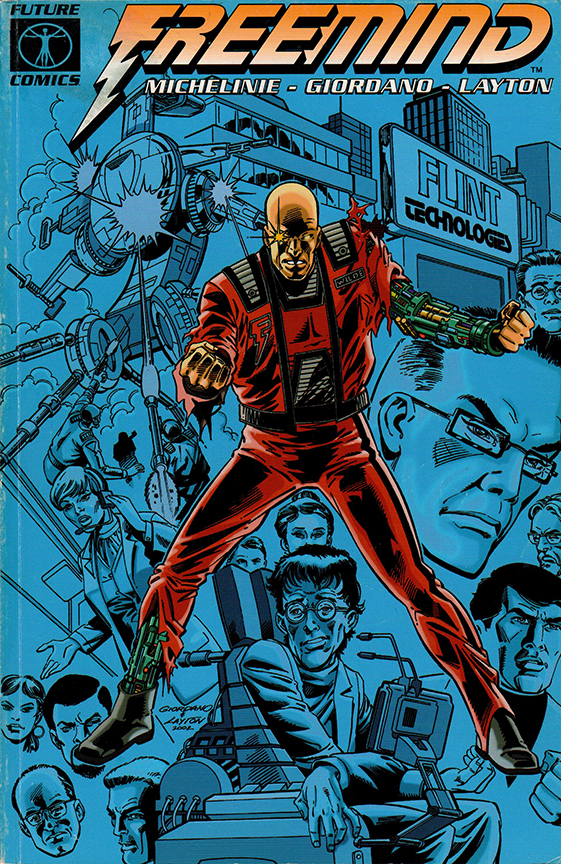 The only trade paperback collection issued by Future Comics, Freemind Volume 1 collects Freemind #0-3, the first story arc of the series. Written by David Michelinie and illustrated by Dick Giordano and Bob Layton (the same team founded the company).

McKinsey Flint is a Stephen Hawking-type brilliant scientist. Like Hawking, though, he was confined to a wheelchair. His imagination was unlimited, and his intellect was unmatched, but he still felt unfulfilled. He turned his powerful mind to the problem and created technology that allowed him to transfer his conscience to a tough, powerful android body with fantastic powers.

If that was the end of the story, that would be one thing, but that’s not how it went. Both Flint and his technology were targeted by nefarious elements, and this created the suspense, action and adventure that framed the more thought-provoking elements of the series.

The set-up is compelling and has the feel of some of the early Valiant titles in terms of its possibilities.

Explore a wide variety of comic book unvierses, including Future Comics and many others in The Overstreet Comic Book Price Guide To Lost Universes. Scheduled to go on sale on Wednesday, November 10, 2021, it was listed iin the September PREVIEWS from Diamond Comic Distributors. Your retailer can place a re-order now or you can also find it on the Gemstone Publishing website (if you don’t live near a comic shop).