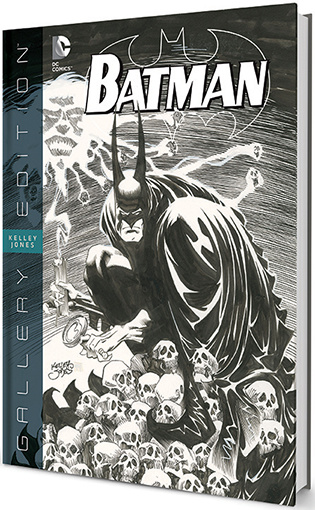 He’s been called the definitive Batman artist of the 1990s, and this collection of Kelley Jones’ work showcases just why he’s worthy of that title. The superb Batman: Kelley Jones Gallery Edition released by DC Comics and produced by Bob Chapman and his team at Graphitti Designs is a joy for Jones’ fans and it would also be an awesome way to discover the work for the first time.

Spotlighting Jones’ work on Batman #515-519 and #521-525, Batman: Kelley Jones Gallery Edition gives readers and comic art collectors the chance to study the artist’s work on the Dark Knight up close and at full size. As with IDW Publishing’s Artist Edition series and the others that have followed them, the art is scanned in high resolution and full color, even though the art itself was created originally in black and white. Allowing for aging, corrections, editorial marks and even notes in the margins, it’s as close as most of us will ever get to owning individual pages from these issues.

Jones’ dynamic, distinctive take on Batman remains both memorable and highly influential. We were already Kelley Jones fans of long standing when we landed his Batman on the cover of Overstreet’s FAN #2, and there’s certainly nothing in this oversized hardcover collection that would alter that viewpoint. He simply delivered page after page of stunning work that scrimped on neither style nor substance.

While he might be best known for the graphic novel Batman & Dracula: Red Rain and its two sequels, Batman: Bloodstorm and Batman: Crimson Mist, his work on on the regular, ongoing Batman is every bit as vibrant. In fact, it may have even gained a step or two with the passage of time.