RETRO REVIEW: Planet of the Apes Archives - Vol. One 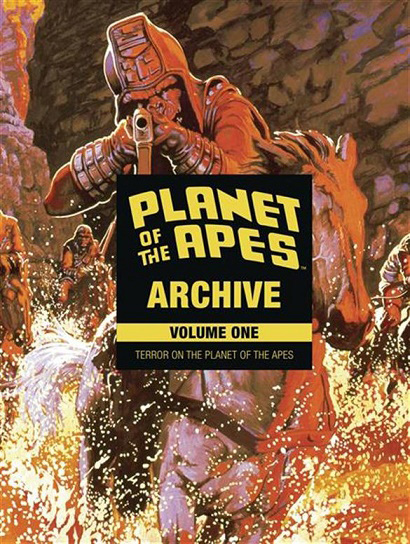 After they acquired the Planet of the Apes license several years ago, BOOM! Studios produced two superb, full series based on the timeline of the original movies, a pair of tie-ins to the more recent film trilogy, and a number of inventive crossovers with properties ranging from Star Trek to Green Lantern.

One of the best things they did during their tenure with the property, though, was unleash this volume, a comic book collection that no serious POTA fan should be without.

Planet of the Apes Archive is a series of beautifully produced hardcover volumes that collect the material from Marvel’s black and white magazine series from the 1970s. The material is published in its original size, making each volume similar to a Marvel omnibus.

While beginning with the second book in the series chiefly focuses on the adaptations of the original movies, this first volume collects Terror on the Planet of the Apes, a long-running, serialized story written by Doug Moench and illustrated by greats Mike Ploog, Tom Sutton, and Herb Trimpe.

Set in an era of relative equality between apes and humans, there are still dangers a plenty for a pair of friends, Jason (a human) and Alexander (a chimpanzee). When Jason is framed for the murder of a high-ranking ape’s wife, the duo flee their former lives and end up in a series of tumultuous adventures.

Packed with different segments of ape society and all sorts of threats – including giant brains and mutant drones – Terror is a highly imaginative, brilliantly illustrated series. In many ways, it paved the way for the incredible work that BOOM! would later do in their own original material by showing a much different world within the context established by the films. This volume is a wonderful introduction to the world of Planet of the Apes in comics.

At this point, the books can command strong prices on the secondary market, but if you’re a POTA fan and don’t have it yet, get serious and get this point.