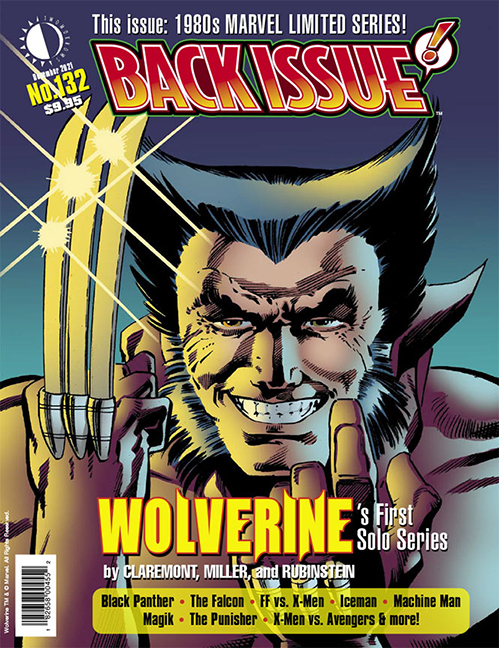 How many different ways can we find to say how great a publication we think Michael Eury’s Back Issue is? How can we even measure the impact it has in keeping alive the memories of and spreading incredible information about a recent past that is suddenly and increasingly not-so-recent?

Seriously, while we seem to praise Back Issue every time we feature it in one of our reviews, this time Mr. Eury and his band of contributors have outdone themselves in covering a very important part of comics history. The rise of the miniseries is a distinct portion of an already distinct era. It’s best represented by the issue’s cover feature, Marvel’s original Wolverine miniseries by Chris Claremont, Frank Miller, and Josef Rubenstien.

Whether it’s The Falcon, Black Panther, Machine Man, The Punisher, or any number of other subjects, the miniseries gave us comics that told specially focused stories, spotlighted characters generally seen as members of teams, and/or placed characters in unsual settings. This issue peels back the layers and takes a look at what worked, what didn’t, and more.

If you love comics and aren’t already reading Back Issue, it’s time to change that.