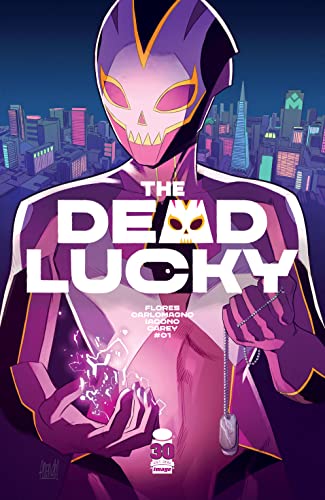 The Dead Lucky introduces Bibiana Lopez-Yang a former soldier who lost most of her platoon and gained electric powers during the incident. She went home to San Francisco to find that the city was taken over by the Morrow company and turned into a military state where low income people were essentially kicked out of their homes to live in less affluent areas. While struggling with her own PTSD, Bibi sets out to stop Morrow.

This new comic is tackling the aftermath of war, how powerful people hurt others, and the ways the downtrodden will fight back – for better or worse. It’s hitting some serious issues, but is by no means a downer. In the debut of Dead Lucky, writer Melissa Flores has laid the groundwork for a heroine willing to put herself on the line to help people, despite her own issues. There’s self-deprecating humor, the melting pot of cultures, and a cast that is already quite likeable.

The Dead Lucky is off to a great start.