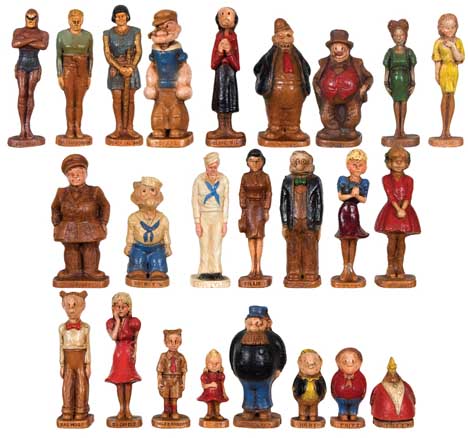 Multi-Products, Inc. existed in Chicago from the 1940s to at least 1959. While their products are well known, the company history is a mystery. Their Disney merchandise 1940-41 catalogue ads state "Division of Protectoseal Company of America, Inc."

Protectoseal began in the 1920s when R.J. Anschicks created a mine safety device known as a "flash arrester." Today the company produces many products to minimize fire loss and provide employee safety.

Their 1945 series of non-Disney comic characters was for many years credited in error to Syroco (originally the Syracuse Ornamental Company), another firm specializing in molded wood fiber products. This erroneous attribution occurred because the 24 figures in the series carry only a King Features Syndicate copyright and no manufacturer’s name.

In 2003, Hake's Americana & Collectibles auctioned a figure of Hans, which was in a rarely seen box stating "Produced by Multi-Products, Inc., Chicago 8, Illinois under license from King Features Syndicate Inc., Copyright 1945."

Of the 24 characters in the series, these 14 are pictured on the box: Alexander, Blondie, Captain Katzenjammer, Cookie, Dagwood, Fritz, Hans, Jiggs, Maggie, Olive Oyl, Popeye, Prince Valiant, The Phantom and Wimpy.

Seven of the previous characters plus the following five were also used as premiums by Pillsbury Farina Cereal: Annie Rooney, Archie, Barney Google, Little King and Tim Tyler. (See item MUL-26 for full list). The other five known figures are Casper, Flash Gordon, Rosie, Tillie and Toots. While the figures carry a 1944 King Features copyright, both the Multi-Products box and the Pillsbury offer specify a 1945 date, and it seems this later date is the likely date of issue. Given the total large number of these figures that have survived, the rarity of the box is surprising.

Other Multi-Product items include the 1943 Captain Marvel rare premium produced for Fawcett Publications and a rather diverse group of figures created to serve as Community Chest and United Fund volunteer awards during the late 1940s and 1950s.