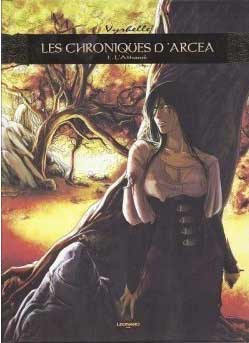 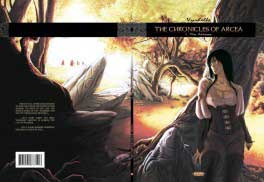 Columnist Mark Squirek is on assignment this week, so new contributor Kat Clements has jumped in with a look at this great cover...

The Chronicles of Arcea is a comic written and drawn by the French artist Vyrhelle. I first saw her artwork on the website DeviantART and was captivated by the cover of her comic’s first installment, The Athame.

Vyrhelle is a freelance digital artist. She uses pencil and paper for her rough sketches, but completes her work on the computer. Her art is characterized by thin outlines, clean yet detailed composition, and a masterful use of light and shadow to create realism and atmosphere. Vyrhelle also attends several European art, fantasy, and anime conventions. T” was self-published by Vyrhelle through LEONARD Productions in France, and an English version was released in 2013.

On the cover of The Athame, a black-haired woman hides behind a gnarled tree in the right forefront of the scene. She is looking over her shoulder to the left, but there is only a ruddy landscape of trees and boulders. The scene is bathed in hues of red, yellow, and white, giving the impression of flames. Although her dark clothes help her blend into the shadows, her golden eyes glow. But this woman is not just hiding; she is also wounded. Blood trails down her cheek. Her sleeve is torn and stained red. A shallow cut is sliced across the side of her corset, letting blood drip onto her dark pants. And, almost hidden in her hand, is the bloody edge of a dagger.

The genius of this cover’s composition is twofold. First, the positioning is perfect. The branches of a tree on the left side of the image are bathed in light. Both the light and the arc of the branches lead our eyes to hers. Because she is deep in shadow, her golden eyes stand out, as if lit from within. From there, we trace the trail of blood down her face, following a lock of dark hair to her arm. The line of sight from her bloody sleeve across her waist to the tip of the dagger forms a perfect diagonal. The sharp angles of her only weapon stand out among the organic curves, ensuring our notice.

Second, the ominous atmosphere of the cover sparks speculation. Her wary posture and her injuries speak loud and clear: this woman is being hunted. But who is she? Why is she in danger? Who or what is she hiding from? How did she get hurt? Will she be able to escape? The cover only shows the aftermath of a fight, not its origin. Because Vyrhelle’s beautifully detailed artwork inspires such questions, we are drawn to open The Athame so we can find out.

Kat Clements graduated with a B.A. in English from Penn State Mont Alto, and currently works as a public librarian and freelance editor. When she isn’t reading fantasy, science fiction, Japanese manga, or comic books, Kat continues work on her fantasy novel Ravens and Roses.