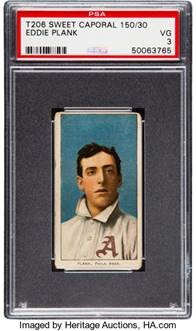 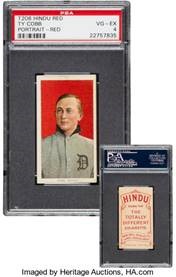 Heritage Auctions dropped the hammer on more than 2,200 trading card lots, bringing in more than $8.3 million in a competitive online auction. The sale contained the first three 2019 offerings in Part I of The David Hall T206 Collection, the most comprehensive assembly of the hobby’s premier tobacco issue.

At more than 100 years old, T206 cards remain a highly-desired collector’s item for sports memorabilia aficionados. The cards came packed with cigarettes; the front of the card would feature an image of a ballplayer, while the back would feature an advertisement for one of several different cigarette brands. These cards can be difficult to find in good condition, as the card stock they were printed on is not particularly sturdy, and wartime paper drives caused many of these cards to end up in the trash. The images on these cards remain as some of the most striking portraits of early 20th century ballplayers; they were paintings produced from photographs, and the colorful result makes them stand out. Several cards in the set saw very short print runs, and other variants (such as the type of cigarette advertised on the back) can cause certain cards to see higher prices at auction than others.

The collection from the founder of Collector’s Universe, and supplied three six-figure results to the total Heritage tally. The standout stale was the $252,000 price for the rare Eddie Plank, PSA VG 3, more than doubling a sale price for an EX 5 example less than two years ago.

“The prices recorded in this sale probably added tens of millions of dollars to the value of the T206 cards held by our clientele, so we expect to be fielding a great deal of consignment calls in the coming weeks,” said Chris Ivy, Director of Sports auctions for Heritage. “We sold a PSA NM 7 Plank for $690,000 last year. What could that be worth now?”