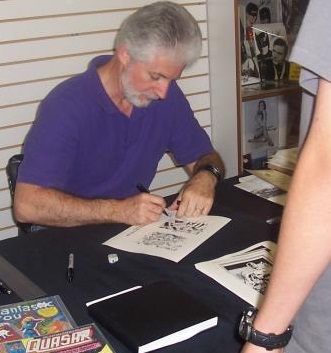 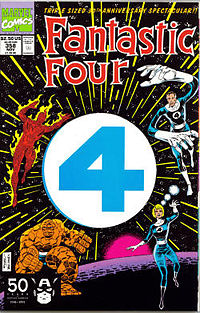 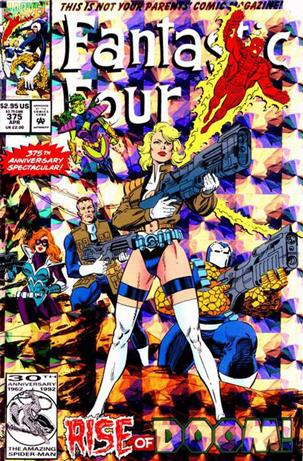 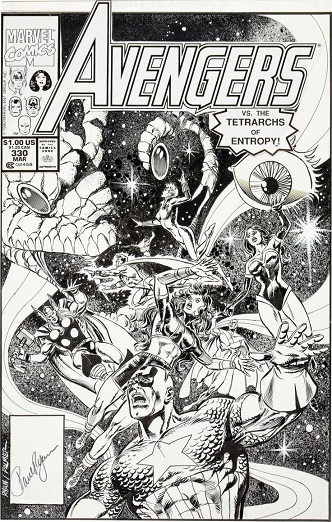 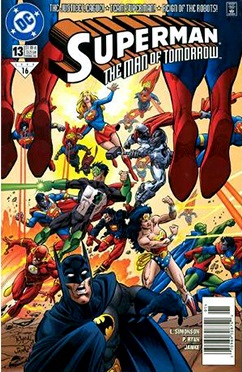 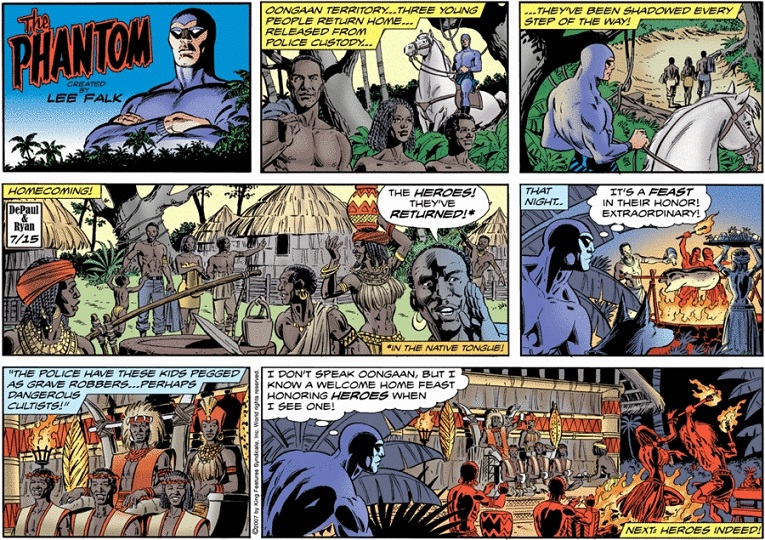 Comics artist Paul Ryan passed away this week at 66 years of age. Known for his work on many DC and Marvel projects, he is beloved for his contributions to the Avengers, Superman, and the Phantom, among many others. In Overstreet’s Comic Book Marketplace Yearbook 2015-2016 Overstreet Advisor and collector Jason Versaggi interviewed Ryan about his career as an artist.

Comic Book Marketplace (CBM): First, tell me a little about your training as a comic book artist, both as a fan and more formally.
Paul Ryan (PR): I attended the Massachusetts College of Art from 1967 to 1971, graduating with a Bachelor of Fine Arts degree in Graphic Design. My only formal training in comics came around 1983-1984 working as Bob Layton’s assistant.

CBM: Was a career in sequential art or comics storytelling something you longed to do? At what point did you decide you had what it took to make a childhood passion your profession?
PR: I had been drawing little one-page, multi-panel stories since grade school. Never had any thought of a career. Heck, I was only nine. I just loved comics and was inspired to make my own.

In 1983, I heard about a deal offered by Charlton Comics for aspiring comics artists. Charlton would publish your work in a new, dedicated title for amateurs, called Bullseye, copyright any character you created in your name and give you 50 copies of the printed piece. There was no pay offered, but it sounded like a good place to start. I sent them copies of the first five penciled pages to get their reaction. I still have the letter they sent me stating that it looked good and to continue. That’s when I thought I might have a chance to break into the industry.

CBM: You were partly there in Marvel’s second Golden Age in the ‘80s. What was it like really breaking into comics at such a high level in your thirties? Were you more prepared for dealing with the industry or were there things that shocked you?
PR: I was pretty naive even at 35. I couldn’t believe that I was really walking around the halls at Marvel and talking to adults about comics like they really mattered. I thought that some editors hated me, some tolerated me and a couple liked me. Tom DeFalco scared the crap out of me. The first words he spoke to me were, “So...why should we hire you?” delivered like one of the Bowery Boys. Jim Shooter, for all his size and imposing presence, was very supportive.

CBM: Aside from the influences of Jack Kirby, were there any other creators whose work you felt inspired your own?
PR: Yes, Jack Kirby was indeed the King. I loved his work on Marvel’s monster titles and westerns in the late 1950s. His Fantastic Four just blew me away. But for other artists, I would have to include. Sy Barry, Dan Barry, John Cullen Murphy, Hal Foster, Alex Kotzky and Leonard Starr for comic strip artists; Curt Swan, Joe Kubert, Carmine Infantino, Murphy Anderson, Steve Ditko, Wally Wood, John Buscema, Don Heck and Gil Kane for comic book artists.

CBM: Your career has some prominent distinctions and one of them is enjoying the third longest tenure on Fantastic Four. What did it mean to you personally to work on the title that started it all for Marvel? Did you take away any highlights from that run?
PR: It was very exciting to be offered Marvel’s flagship title. Exciting and not just a little intimidating. People had asked me what direction [I wanted] to go with the series. What innovations I might have in mind. My only thought was, “Don’t screw up... don’t break it!” Luckily, Tom DeFalco knew what he was doing, so we were fine. Yes, that same Tom DeFalco that terrified the newbie in 1985 was my collaborator for nearly five years on the Fantastic Four and still remains a dear friend.

CBM: Another of those famous accomplishments you are known for is being the only artist to work on both the Superman and Spider-Man wedding issues. As we close in on the 30th anniversary of Amazing Spider-Man Annual #21 in 2016, what was it like getting to contribute to that historic issue?
PR: Okay, you will, undoubtedly, notice that a certain recurring theme is going to run through this interview. I was terrified! Excited, but knowing the historic and financial significance of this story for Marvel Comics, I couldn’t help but be a little nervous. Considering that I had only been in the business a minute and a half I should never have been given that assignment. Jim Shooter really took a chance with me. He asked. I accepted. He handed me the plot. I hope I didn’t disappoint him.

CBM: You were also present for what some might consider one of the most polarizing chapters of Superman’s history - the Superman Red and Blue concept after his return. At a time when the weddings, death and return of Superman was generating some of the earliest mainstream media buzz for comics, how did that affect you and your work?
PR: One of the greatest thrills I experienced working in comics was to be allowed to draw Superman. To me, he was the first, best hero. I was the only kid on my block to have the official, authorized Superman costume. Although looking back I’m pretty sure my parents never expected that I would run around the neighborhood wearing the official, authorized Superman costume. I think my sisters told everyone I was adopted. As for the Electro Superman, I just drew the stories I was given, hoping he would eventually return to his familiar powers and costume.

CBM: Describe a little bit about your creative process when you are laying out a book. Do you prefer to ink your own pencils?
PR: The creative process is generally not something that happens on a conscious level. I read the stories and “see” what it should look like in my mind, do a thumbnail sketch of the picture in my head and then go to full size drawing paper. Yes, I do prefer to ink my pencils. I have worked with some amazing inkers. Some inkers made my work look better than it was. Some other inkers… not so much. When I ink my pencils, the readers get to see what I can do. What my vision - no pun intended - was for this or that piece. So, for better or worse, it’s me.

CBM: Let’s talk collaborations. Who are some artists you have enjoyed inking? Conversely, who are some guys you have liked to ink.
PR: I have only a little experience inking other artists’ penciled art, but John Byrne does stand out in my memory. It was on West Coast Avengers. John asked me to take on the inking chores on that title. His pencils were so finished and complete you could have scanned them and dismissed the inker. It took me about two hours of fretting over his work before I got up the courage to put ink to paper. I think we did well for the four issues we shared before John moved on.

CBM: Your runs on Fantastic Four and Avengers were high watermarks for me as a fan on those titles since you’ve left them. Your draft work seemed to seamlessly transition from the end of John Buscema’s stints on those books in the ‘90s. What character or title would you have loved to have another long run on?
PR: Thanks, that’s kind of you to say. I enjoyed working on both titles. They were favorites of mine as a kid. John Buscema was one of the biggest influences on my work - I had bought and devoured How to Draw Comics the Marvel Way by Stan and John when I was younger - and with Tom Palmer doing finishes, our issues had a passable John Buscema look. I think I was on Avengers for a year before anyone knew that Big John had left.

CBM: It’s now been officially 30 years since you started working for Marvel. What was your favorite creative moment from your time there?
PR: Favorite creative moment - that’s an easy one. Sitting down with Mark Gruenwald and coming up with the look for DP7. At Mark’s direction we “cast” our characters based on real people. This is something that I still do when confronted with new characters. When given a description of a character by the writer I look through various magazines for just the right look.

CBM: How did you become involved with The Phantom?
PR: I was running an eBay auction back in 2001 and received an email from a prospective bidder named Jonas Vesterlund from Sweden. He was a fan of my work and asked if I ever considered working for a comics company outside the US. In his younger days he was an intern at Egmont Publishing, which produces The Phantom – Fantomen – comic in Sweden. I told him I was interested. He gave me contact information, I sent a cover letter and some Marvel and DC comics I had penciled to Editor in Chief Ulf Granberg. He wrote back and asked if I would draw some model sheets to see how I would handle the Phantom and the supporting cast. I guess he liked what he saw. He signed me on to Team Fantomen and we collaborated for five years. It was this experience with the Ghost Who Walks that put me in a pretty good position when George Olsen retired from the daily Phantom strip. King Features Editor Jay Kennedy asked me to take on the dailies. That was almost 10 years ago. I also handled the Sunday strip from 2007 to 2011.

CBM: What upcoming projects do you have? Where can fans see you and your work in 2015 and beyond?
PR: Sorry, but the only project I have coming up is to participate in a three day cattle drive in Montana. No.... not kidding. [I] always wanted to be a cowboy. I get to live the cowboy life with my wife, Linda, every summer in Melville, Montana surrounded by the Crazy Mountains.

CBM: Finally, Guardians of the Galaxy was a massive hit at the box office and with fans. There was one character in particular who stood out to me among the “Ravagers.” The pirate with the reddish locks and one bionic eye - he reminded me of your creation, Ravage 2099. Any word from the producers if this was a nod to your hero?
PR: Really?! I will have to check Guardians again when it comes out on Blu-ray. I don’t remember that character. If such a nod was intended, it never reached me. Producers don’t call me. Editors don’t call me. My cats don’t call me. Luckily the lovely Linda does call. It’s all good.