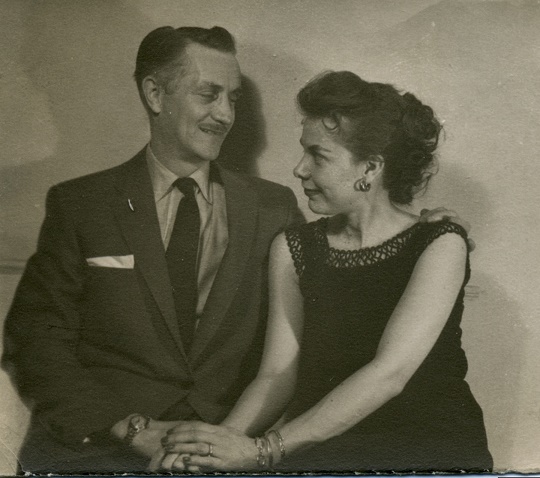 David Ackerman Kyle was born on Valentine’s Day in 1919 and died of complications from an endoscopy on September 18, 2016. He was a publisher, an editor, a critic, a writer, a historian, an artist, and an award-winning pioneer in the field of science fiction. In 1948, he co-founded (with Martin Greenberg) Gnome Press, one of the first major speculative-fiction publishing companies decades before the term “speculative fiction” was coined. Before that, Kyle was one of the members of what was later termed “First Fandom.”

His credits include that early fan activity (including publishing amateur magazines, membership in the New York fan club Futurians, and attending the first World Science Fiction Convention), and he went on to be chairman of the 1956 Worldcon (NYCon II). He married fellow fan Ruth Landis in 1957 (she died five years ago), and they and their two children—Kerry and Arthur—attended a variety of conventions large and small in the years that followed.

His professional work included licensed “Lensman” novels (set in the universe of the classic series by E.E. Smith) and illustrated histories of science fiction. He was active in the fields of science fiction and fantasy from his teen years until his death, appearing at a variety of conventions in his distinctive red jacket. In fact, his most recent visit with friends came the day before his death, and his daughter wrote, “Dad chatted about science fiction with the EMT who brought him to the hospital and with the nurses who made him comfortable … Always spreading the word and wishing to instill within them the flame he had within himself.”

His son wrote, “I will terribly miss my almost daily conversations with him, but he lived to enjoy the reality of his dreams, from seeing man walk on the moon to talking to me and his grandchildren on FaceTime.”

That’s some of what a formal obituary would say, but I have to add that David was one of the fan friends I’ve always known: He and Ruth were friends of my mother and father and then of Don and mine, and their kids—Kerry and AC—grew up as friends of my daughter. In fact, our families even “traded daughters” some summers, and Valerie moved to New York City to room with Kerry the year she graduated from high school.

In recent years, David has been acting grandfather to Valerie’s son—and every time I’ve seen David, he’s been the same delightful friend I’ve known for years. His body grew weaker, but his wit continued to entertain friends and fans alike.

In addition to his vast output in and influence on the science fiction and fantasy fields, he’s been cited as publishing in 1936 what may have been the first “comics fanzine” in Fantasy World. As an adult, he expressed little regard—and occasional outright contempt—for comic books. Which was yet another opportunity for his humor. (He’d hung out with other artists at one point in his life and he told me that, while he’d never done actual comic book work, he did occasionally insert inappropriate images into the art of his friends who worked in the field: images that would have to be whited out before the art was delivered. Which might convey a sense of the man, come to think of it.)

His affection for comic strips, on the other hand, was lifelong, and he was in the habit of clipping several. Included among his favorites were Flash Gordon, King Aroo, Krazy Kat, Barnaby, and Little Nemo, and he had Al Capp speak at NYCon II.

It’s no use. I can’t convey his importance—nor how he enriched the lives of those who knew him.