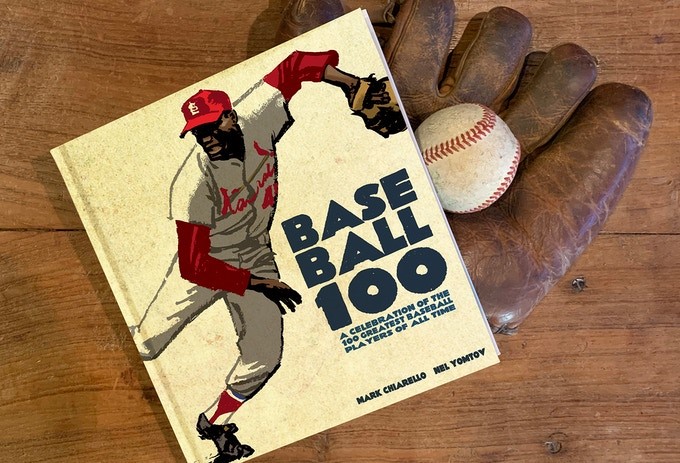 Baseball 100, a new fully illustrated book, celebrates the 100 greatest baseball players of all time. Artist Mark Chiarello and writer Nel Yomtov collaborated on this 128-page hardcover, which is currnetly seeking backers on Kickstarter.

Together Chiarello and Yomtov have pored over the list of great baseball players and the complexities of their skills to rank the top 100 players. Each page features a full color illustration of the player accompanied by biographical information on the player’s career and place in baseball history.

Chiarello is widely celebrated for his art for the book Heroes of the Negro Leagues. Among his many credits are work Lucasfilm, Disney, the NBA, Topps, DC, and Marvel Comics. He has taught and lectured at the Norman Rockwell Museum, Pratt Institute, the School for Visual Arts, and the Savannah College of Art. He illustrated the frequently imitated Batman cover for The Overstreet Comic Book Price Guide #40, and in one way or another had a hand in at least one of the covers for the next nine editions.

Yomtov is an award-winning author of nonfiction works. His writing has appeared in HISTORY and National Geographic publications, and major educational publishers, including Scholastic Inc., Capstone Press, and ABDO Publishing. He has written extensively on American history, world politics, military history, and baseball.

Pledge levels for the project start at a $10 donation, then $40 for a copy of the book, up to $800 for the book plus an original watercolor of players like Hank Aaron and Joe DiMaggio.