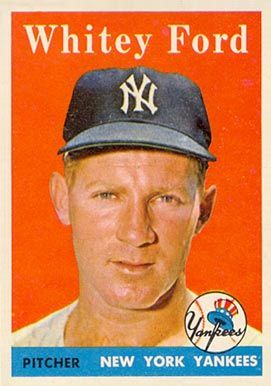 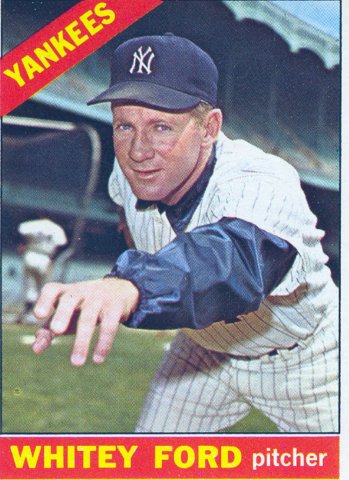 The Yankee great known as the “Chairman of the Board” spent his entire career from 1950 to 1967 in New York. He had a 236-106 record that gave him a .690 winning percentage, which is the highest of any pitcher of the 20th century who had at least 150 wins. Ford holds the record for most World Series victories at 10 and World Series strikeouts at 94. He also has a record streak of 33-1/3 scoreless innings in a World Series. The lefty was a ten-time All-Star, Cy Young Award winner, and he was inducted into the Hall of Fame in 1974.

Ford was born on October 21, 1928 in Manhattan – not far from where he’d spend his professional career. He signed a free agent contract with the Yankees in 1947 and rose through the minor leagues. Ford joined their Major League team in 1950, getting a 9-1 record and was second on that year’s AL Rookie of the Year list. He spent the next two years serving in the military then rejoined the Yankees in ’53. Ford was mostly used as a backup for a few years, then started playing more in ’61, the year in which he was named the World Series MVP.

After he retired from playing, Ford worked for the Yankees as a pitching coach and first base coach in the mid-‘60s to mid-‘70s. In 1977 he worked as part of the broadcast team for the Toronto Blue Jays’ first game in history. In 2002 he opened Whitey Ford’s Café, a sports-themed restaurant and bar in Garden City, New York.