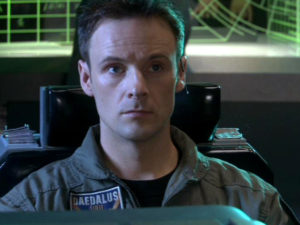 Actor Kirby Morrow, known for his work on Stargate: Atlantis, died on November 18, 2020. His family announced his passing on social media, but did not disclose how he died. Morrow was 47 years old.

Morrow played the recurring character Captain Dave Kleinman, the weapons officer on the U.S.S. Daedalus, on Stargate: Atlantis in 2005-2006. He returned to the role in 2010 for an episode of Stargate Universe. His introduction to the sci-fi series was in two guest starring roles on Stargate SG-1 in ’98 and 2002.

Born on August 28, 1973 in Alberta, Canada, Morrow studied at Mount Royal University in Calgary. Along with his work on Stargate, he was known for voice acting for animation, including voicing in Mobile Suit Gundam Wing, Dragon Ball Z, X-Men: Evolution, Transformers: Cybertron, Class of the Titans, Death Note, and Lego Ninjago: Masters of Spinjitzu.

Some of his other live-action roles were in Stand Against Fear, Breaker High, The Outer Limits, Bones, Slap Shot 2: Breaking the Ice, L.A. Law: The Movie, The L Word, Supernatural, Arrow, RoboCop, Parked, The Good Doctor, Legion, Supergirl, and Mystery 101.