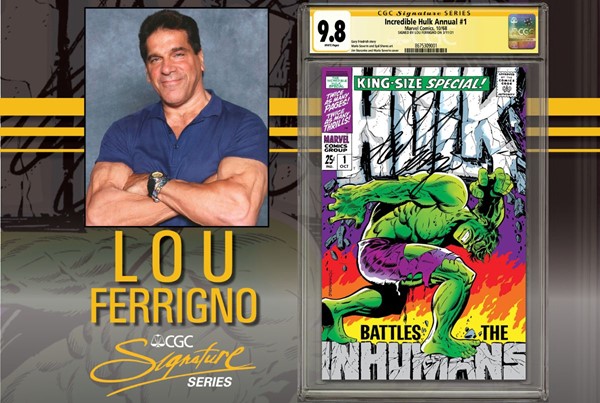 Lou Ferrigno, the actor who brought the Hulk to life on The Incredible Hulk, is doing a CGC In-House Private Signing. Ferrigno portrayed the big green hero for all five seasons of the 1970s show and in multiple other movies, TV series, and cameo appearances.

He started his run as the Hulk in 1977 with the two-hour pilot, followed by 80 more episodes through 1982. Ferrigno starred in the series’ three TV movies, he voiced the Hulk in the ’96 cartoon, and made cameos in the movies Hulk and The Incredible Hulk in 2003 and 2008, respectively.

In addition to playing the Hulk, Ferrigno starred in the Hercules movie as the titular character and its sequel, The Adventures of Hercules, and he had a recurring role in The King of Queens. Outside of acting, Ferrigno won the IFBB Mr. America award for bodybuilding in 1969. Since retiring he is still active in fitness and nutrition.

“We’re so thrilled to bring iconic actor, Lou Ferrigno Sr. in for a private signing,” CGC’s Signature Series Director Brittany McManus said. “Not only is Ferrigno just an incredible guy, but he’s also such a memorable star who really brought The Hulk to life for many of us. I know we have so many fans of The Hulk, and I think they will be as excited as we are to have this signing opportunity.”

For this exclusive signing, both free and paid CGC members can submit books directly to the CGC headquarters in Sarasota, Florida. CGC must receive all submissions for this event by Friday, April 16, 2021.

After the books are signed, CGC will grade and encapsulate them with expedited turnaround of three weeks for grading or six weeks for grading and pressing. Then collectibles will be shipped back to the owners.

Ferrigno’s signing fee is $150 per item, signature and character name is $185, and signature and quote is $185. The purchases include the expedited turnaround times and encapsulation with CGC’s yellow Signature Series label and CCS pressing (for an additional $20 fee).

Further submission details can be found on CGC’s website.