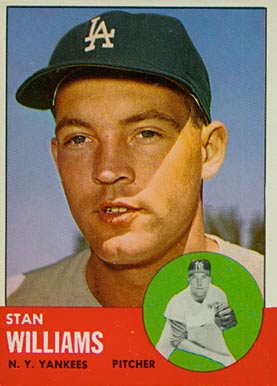 All-Star pitcher Stan Williams died at his home on Saturday, February 20, 2021. He had been hospitalized earlier in February due to effects of cardiopulmonary illness, according to his son, Stan Jr. He was 84 years old.

Known as the Big Hurt, Williams spent 14 years in the Majors racking up a 3.48 ERA and record of 109-94. The two-time All-Star righthander helped the Los Angeles Dodgers win the 1959 World Series and won a World Series title in 1990 as pitching coach of the Cincinnati Reds.

Williams was signed as a free agent by the Dodgers and joined them in 1958 when they moved from Brooklyn to Los Angeles. In ’59 he pitched three scoreless innings in the second game of the National League series to send the Dodgers to the World Series. He was there until 1962.

He was traded to the New York Yankees where he played until ’64 and after that Williams played for Cleveland in 1965-1969. His later seasons were spent in Minnesota, St. Louis, and finally Boston.

After Williams retired from pitching, he moved on to being a pitching coach, scout, and advisor for several teams. In his role as a pitching coach, he helped the Red Sox, Yankees, and Reds win titles across the division, league, and World Series.