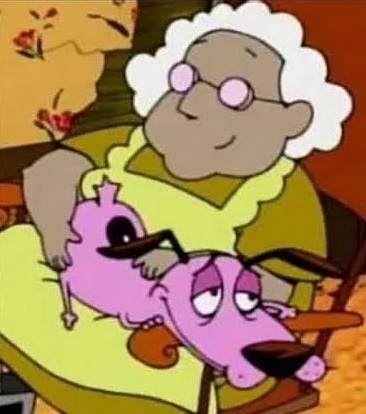 Voice actress Thea White, the voice of Muriel in Courage the Cowardly Dog, died on Friday, August 6, 2021, from an infection that developed following surgery. Her passing was announced by her brother John Zitzner on social media. She was 81 years old.

White was born on June 16, 1940, in Newark, New Jersey. She began acting as a child, then studied at the Royal Academy of Dramatic Arts and the American Theater Wing. She performed on stage in Dallas and on Broadway.

She voiced Muriel in Courage the Cowardly Dog from 1999 to 2002. Following that, she voiced the character in the Cartoon Network Racing video game and The Fog of Courage short. She did an episode of Pecola, loaned her voice to Scooby-Doo! Legend of the Phantosaur, and her last role was voicing Muriel Bagge in 2021’s Straight Outta Nowhere: Scooby-Doo! Meets Courage the Cowardly Dog.