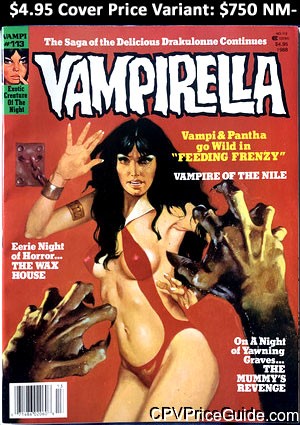 The new 2022 edition of the free online guide caters to collectors interested in Canadian Price Variant (CPV) newsstand comics, also known as “Type 1A Price Variant” comics. Coverage this year has expanded to include the Vampirella title along with several other Warren/Harris magazine titles.

Back in 2010, historian and Overstreet Advisor Jon McClure introduced the term “Type 1A” in The Overstreet Comic Book Price Guide #40 article “A History of Publisher Experimentation and Variant Comic Books” to describe this type of cover price variant. Collector interest in Type 1A Price Variant comics has continued to build since then, and McClure’s updated variant article was published in The Overstreet Guide to Grading Comics Sixth Edition in 2021.

The first edition of this guide was released in 2017, by McClure, fellow Overstreet Advisors Doug Sulipa, Bill Alexander, and Paul Clairmont, and historian Angelo Virone, in collaboration with Benjamin Nobel of the Rare Comics Blog.

Together the collaboration team announced the release of their fifth edition, The 2022 CPV Price Guide for Canadian Price Variants (Type 1A), available to read without cost. It has been published online at cpvpriceguide.com.