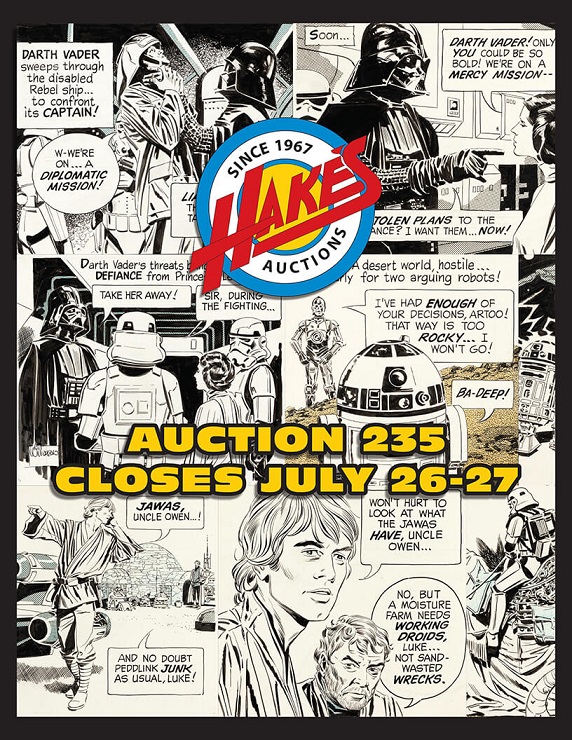 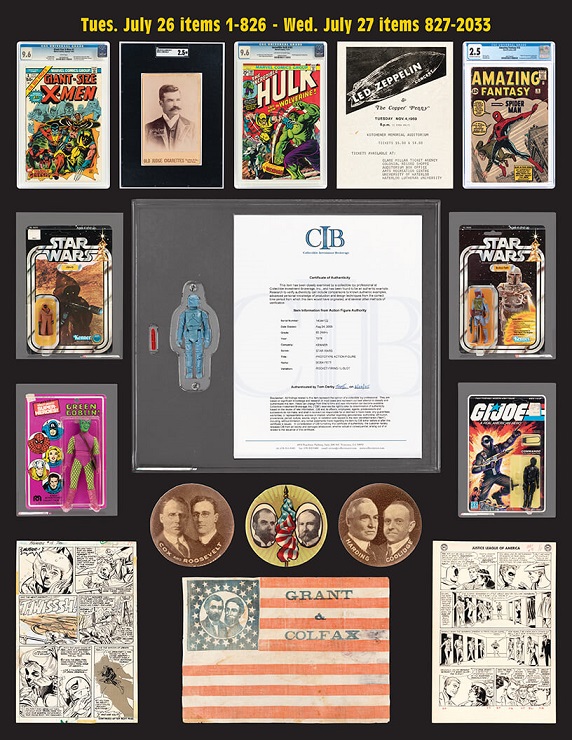 Hake’s Auctions is beating the summer heat with their next premier auction. The 2,033-lot Auction #235 includes an eclectic blend of pop culture and historical memorabilia with rarities from 19th century political material to Star Wars action figures. There are key comic books, notable pieces of original art, toys, baseball cards, and much more. The auction opens for bids on Tuesday, July 5, 2022, and will close on Tuesday and Wednesday, July 26-27.

Star Wars has a strong presence in the auction, starting with a Boba Fett rocket-firing prototype (L-slot) AFA 85 NM+, which quickly follows their world record setting sale of an L-slot AFA 80+ for $236,000. A Boba Fett 21-back-B AFA 85 and a Jawa 12-back-A (vinyl cape) AFA 85 NM+ are among the rare action figures in the auction. Hake’s will also offer Star Wars daily strip original art by EC Comics and Flash Gordon icon Al Williamson from the collection of Star Wars marketing luminary Charles Lippincott.

Joining the Williamson Star Wars strips in the original art section are a pair of pages from key comic issues. One is the Justice League of America #19 original page by Mike Sekowsky showing the important moment that the Justice League revealed their identities to each other, and the Marvel Premiere #15 original art by Gil Kane from the first appearance of Iron Fist.

Two of the auction’s prominent comic lots are the first appearance of Spider-Man in Amazing Fantasy #15 CGC 2.5 and Wolverine’s debut in Incredible Hulk #181 CGC 9.6.

On the political side, Hake’s is selling a Cox and Roosevelt rare smallest size 5/8” jugate button and a Grant and Colfax rare 1868 jugate campaign parade flag, which is one of only four known.

The auction will be open for bidding from July 5 to July 26-27 at hakes.com.