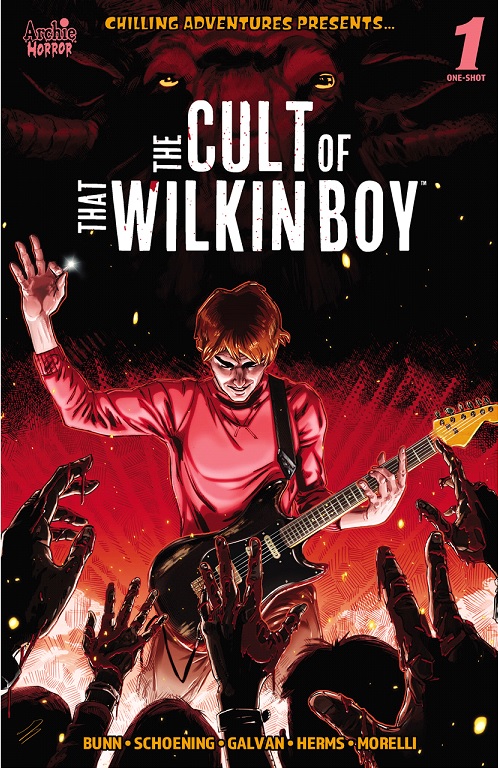 Rock star Bingo Wilkin is back at Archie Comics in a horror story about a demonic deal he can’t refuse. Chilling Adventures Presents…The Cult of That Wilkin Boy is written by horror comics star Cullen Bunn (Harrow County) with art by Dan Schoening (Ghostbusters). The one-shot will be in comic shops in April 2023.

“Getting to work with Cullen is an honor, as he’s a master of scripting horror, and Dan’s vivid and detailed work helps accentuate the darkest and most disturbing aspects of Cullen’s writing,” Archie Comics Senior Director of Editorial Jamie L. Rotante said. “I was inspired by cult-based horror movies like Mandy and Midsommar, but Cullen took it to the next level, using musician character Bingo Wilkin to tell a story that’s about the darker sides of fame. This is an unforgettable story that I know will delight all horror fans.”

Bingo was introduced in 1968’s That Wilkin Boy #1 and became a popular character who headlined his own spinoff for 14 years. He is Jughead’s cousin who lived in Midvale and was the leader of the band, The Bingoes. The new one-shot will see Bingo as a modern hipster musician seeking fame, but finding powerful cults.

“The story we’re seeing in this book is closely related to the original stories; it starts in pretty much the same place for Bingo and his friends,” Bunn said. “But I wanted to explore what might happen if the story took a dark, infernal turn, so I wove in some classic demonic folklore. What would happen if Bingo got everything he wanted, but he paid a terrible price to get there? The Bingo of this story is quite a departure – an evolution or devolution – of the wholesome character of yesteryear, corrupted by fame and power and guilt and jealousy. He’s achieved what he thought was impossible, but his karmic payments are coming due.”

“Music plays a big part in the character makeup of Bingo Wilkin, but instead of the classic late ‘60s pop rock aesthetic, we’ve updated him with more of a grunge/alternative rock vibe,” Schoening said. “I pulled visual inspiration from bands like Weezer, Nirvana, Beck, and Green Day. With the touches of horror throughout the tale, I directed my attention towards Harry Clarke’s Faust illustrations and the phantasmic work of Hieronymus Bosch.”

The Cult of That Wilkin Boy, with a cover by Robert Hack, inks by Ben Galvan, colors by Matt Herms, and lettering by Jack Morelli, will be in comic shops on April 19.