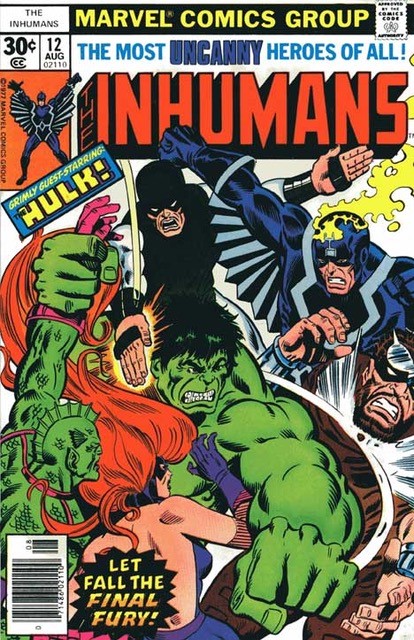 Title: “A Berserker Called Hulk!”
Synopsis: While trying to warn Earth’s leaders of the Kree’s war plans, the Inhumans run afoul of the Incredible Hulk.

Review: The Inhumans end their first title run on a bit of a down note. This standalone issue, featuring a battle with the Hulk, isn’t bad, it’s just a letdown from the promise of earlier issues. One has to wonder if the bimonthly schedule didn’t hurt this series, as it took its time building the “War Between the Three Galaxies” storyline. The letters page promises that story would be dealt with in the pages of Captain Marvel (and it would, in #53), but that’s a review for another time.

Cool factor: It’s the Inhumans vs. the Hulk! Sounds like a great Stan Lee/Jack Kirby-era throw down!
Not-so-cool factor: Unfortunately, inventiveness like The Man’s and power like The King’s are sorely missing here. (Also: Medusa using her hair as a parachute; that’s just silly.)

Notable: Cover artist Al Milgrom sneaks his signature in as the Hulk’s teeth.

Collector’s note: According to The Overstreet Comic Book Price Guide, there’s a 35¢ cover price variant of this issue.

Character quotable: “Hulk says police are wrong! Wrong to hurt Inhumans! Hulk does not like wrong!” – The Incredible Hulk, laying down the law.