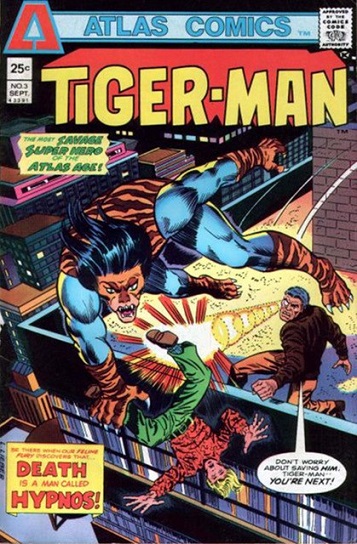 Title: “Hell is Spelled … Hypnos!”
Synopsis: Tiger-Man’s investigation of a string of suspicious suicides brings him to blows with an insane psychiatrist named Dr. Hypnos.

Review: This third and final issue of Tiger-Man is a bit of a dud. Too many coincidences undermine the story, which is also weighed down by clunky dialogue and a rushed, preachy ending. Gerry Conway has done better. The same is true, of course, of artist Steve Ditko, who turns in an adequate-if-uninspired job here. And Ditko’s pencils get little love from the unsympathetic inks of Al Milgrom. As with much of the Atlas (Seaboard) line, Tiger-Man feels like a C-list Marvel knockoff. It’s a shame: This series – and publisher – could have been so much more.

Copyright ©2017 Off the Wahl Productions, all rights reserved. Each week, T. Andrew Wahl offers up a Bronze Age Minute. For more, check out Wahl’s website, SequentialReaction.com.