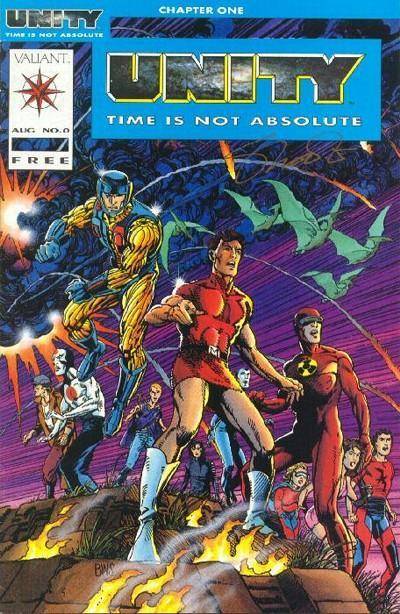 In August of 1992, Voyager Communications proved that all of its comic book line’s cohesive issues, the telling of the Valiant saga so far, and all of its first year of stories primarily written by comics prodigy Jim Shooter, were just prologue – and the future of comics and the company had begun within the pages of Unity #0.

Unity #0 was a free, first chapter of Valiant’s companywide crossover for readers that unleashed the full power of its comic book universe. Nothing more celebrated this momentous occasion like the powerfully heroic cover by acclaimed creator and former member of the legendary Studio, Barry Windsor-Smith. Under his masterful pen, both new and familiar heroes stood battle ready in an alien land, with black skies and pink- and indigo-colored storm clouds quickly falling upon them.

Assembled for the first time on one cover was Magnus (whose Valiant origin would be chronicled in the series), X-O Manowar, Rai, Archer & Armstrong, the Eternal Warrior, Shadowman, the Harbinger kids, and the atomic man-god Solar. Even Native American dinosaur hunter Turok was represented by the four pterodactyls flying in the threatening sky above them. Joining forces against the all-powerful Mothergod, these desperate heroes would face great menace in order to prevent her mad hijacking of reality.

Available with a blue and variant-red logo, this comic – the opening salvo of a crossover that stands up with DC Comics’ classic Crisis on Infinite Earths and Marvel’s epic Secret Wars – is still easily found in better comic book shops. One looking for a stunning comic – and an epic cover – should search it out!