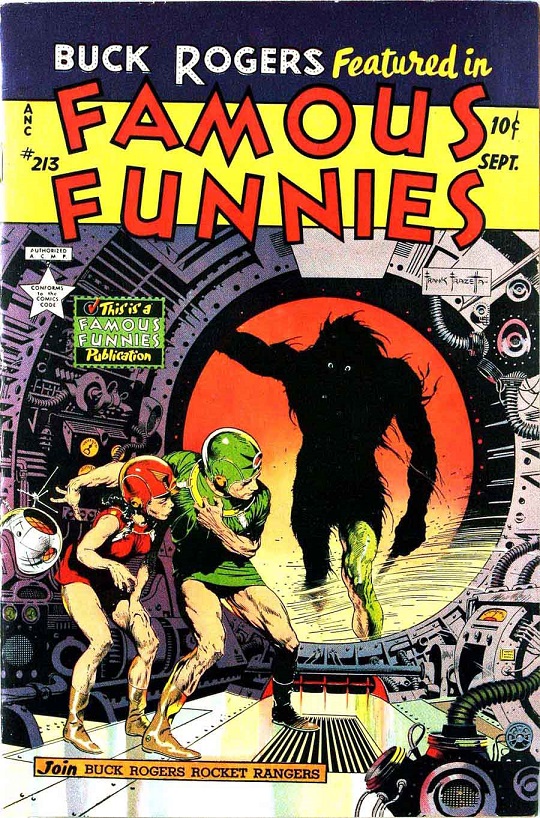 The 1950s is arguably the “classic” era of science fiction theater – both cinematic and four-color. Science fiction movies and comics drew upon political themes or public concerns of the day, including depersonalization, infiltration, or fear of nuclear weapons. Invasion was also a common theme, as were various threats to humanity.

Master illustrator Frank Frazetta successfully communicated both the themes of invasion and the threat to humanity through one of his most famous comic book covers, 1954’s Famous Funnies #213. The cover to a Famous Funnies Publication, this classic frontispiece depicts legendary space hero Buck Rogers and a female companion discovering a hulking alien creature emerging from outside their spacecraft’s threshold. In lesser hands, this would have been a startling piece for fans to ponder. In the hands of the grandmaster, it is a masterwork to be celebrated by generations of collectors and art enthusiasts.

The first science fiction comic strip hero, Buck Rogers was launched into the far-flung future – and in newspapers worldwide – on January 7, 1929. By the spring of 1930 – a little more than a year later – a Sunday comic was added due to the tremendous popularity of the hero’s strip, Buck Rogers in the 25th Century A.D.

One of Frazetta’s most famous works, the cover of Famous Funnies #213 has found great collector appeal over the decades. As late as August 2018, a member of the cgccomics.com boards left a post on the website commenting on the then-recent sale of a CGC 8.0 copy of Famous Funnies #213 going for $6,000 in a completed Heritage Auction. An investment for any and all serious art enthusiasts, this must-have book – and its truly memorable cover – are just the thing to add to finer collections everywhere.