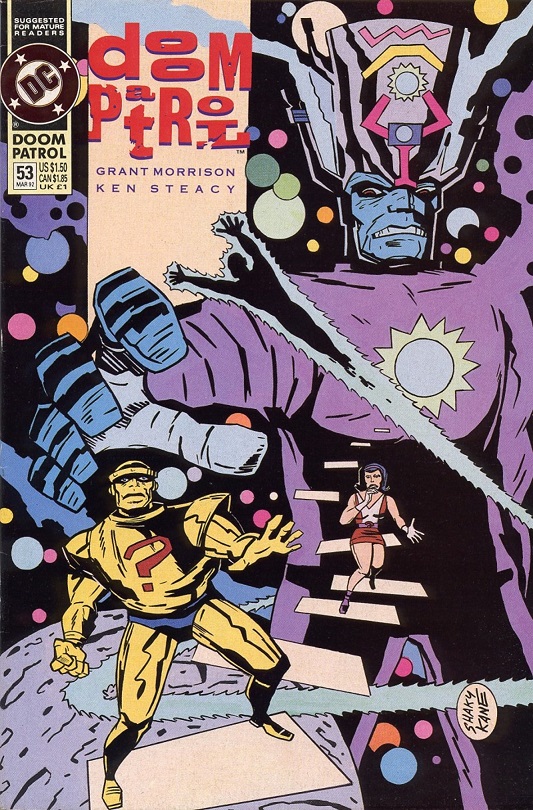 Once upon a time, DC Comics’ pre-Vertigo titles were indeed cutting edge. Animal Man, Hellblazer, Sandman, Swamp Thing, and, of course, Doom Patrol. These titles offered stories that stretched the creative limits of the comic book medium – as well as donned beautifully strange covers that begged to be picked up by longtime fans and new readers everywhere. In fact, they still do.

Even before Doom Patrol #53 (March 1992) acclaimed comic book scribe Grant Morrison had offered his readers stories of weirdness and wonder. But teamed with artist-extraordinaire Shaky Kane – known by some as a conjuror of psychedelic Kirbymania – he took the flagship team of the “Sophisticated Suspense” era of comics, for lack of a better name, and brought it back to its very superhero roots. In fact, for most, it was something to “marvel” at – pun intended.

Making the cover look like a Silver Age comic book that also brings in elements of the old Marvel comics, Kane’s frontispiece of Doom Patrol #53 immediately catches the eye while signaling the powerfully unique story within. Giving DC’s uncanny super-team a classic Stan Lee pastiche coupled with a Jack Kirby-esque touch captures the flavor and nostalgia of comic books of yesteryear, and once again, gets the job done.

As one of the most interesting covers to come from a comic book line where strangeness was an everyday occurrence, this piece is nothing less than a four-color masterpiece. What’s funny is that a decade later, Marvel’s Joe Quesada and Axel Alonso would bring a Vertigo flavor to its Marvel characters. Funny how that happens sometimes. With or without that nugget of knowledge, though, search out this treasure and be awed.