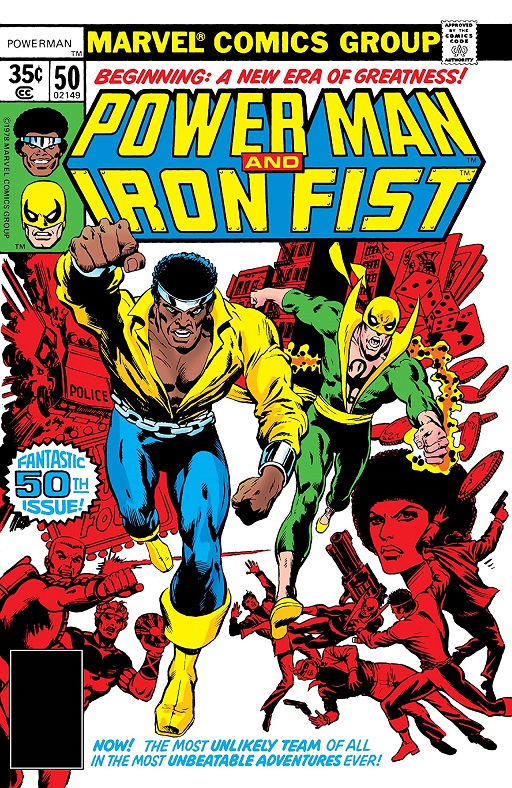 It wasn’t the first buddy hero comic. There had been DC Comics’ Batman and Superman showcase, World’s Finest Comics. And, don’t forget the inspired work of Neal Adams and the late Dennis O’Neil within the pages Green Lantern/Green Arrow. But if you are looking for a standout buddy book that offered something more, there was nowhere else to look at in comics stores in the 1970s and ‘80s than Marvel Comics’ groundbreaking Power Man and Iron Fist #50 and all that came after.

Beginning with Power Man and Iron Fist #50, Marvel Comics did what it did best by looking at pop culture trends and successfully capitalizing on them. With both Blaxploitation and the cinematic art of Chopsocky dominating theaters and the imaginations of young people in the ‘70s, Marvel made the most of the film phenomena’s popularity by exploiting them in one book. What could have been a throwaway idea, though, the series only strengthened the characterizations – and ever-growing bond – of both these “Heroes for Hire” and once “minor” characters, making their comic a four-color destination at newsstands around the world. And let’s not forget when Power Man and Iron Fist #50 crossed the color barrier . . . not the first comic book to do this, but perhaps the one that may have made the most impact.

Featuring a cinematic cover illustrated by comic book great Dave Cockrum, the cover of Power Man and Iron Fist #50 packs the power and punch of a must-have collectible during exploitation movies’ heyday, as well now in the more liberated 21st century. Talking about liberated, there’s also the Daughters of the Dragon – the sensational Misty Knight and Colleen Wing – who would put the strictest ERA members to shame. It’s all good and it’s all on the cover.

As far as the excellence of Power Man and Iron Fist, it was a comic book series that immortalized a place and time while simultaneously standing the test of time. By both thrilling and delighting readers for decades, the comic book’s draw can be seen on the very cover of this landmark issue. And, it’s still well worth the price of this sought-after book.