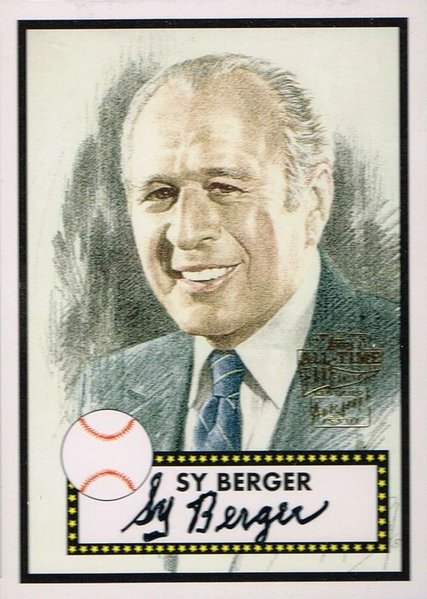 Sy Berger, considered the father of modern day baseball cards, joined the Topps company in 1947 and went on to work there for more than 50 years. Berger also helped co-design the 1952 set, which would go on to essentially become the template for most contemporary baseball cards.

The design of that 1952 set included the player’s photograph, name, facsimile autograph, team name, and logo on the front; the back of the card included information such as the player’s height, weight, batting and throwing side, birthplace, birthday, statistics, and a quick biography. Though packs of cards now cost a little more than a nickel and are no longer packaged with a stick of gum, the design is still in use today.

Berger also most significantly invented the practice of signing MLB players on an annual basis to be able to use their name and image on the cards themselves. His friendships with players such as Willie Mays helped get the signatures required for these sort of deals. These deals not only helped establish Topps as the go-to baseball card company, but also helped eliminate competition; the Bowman Gum Company was bought out by Topps in 1956 just three years after Bowman’s parent company had attempted to sue Topps over exclusivity rights.

Berger passed away of natural causes on December 14, 2014. His impact on card collecting has been immense, and clearly will last another several lifetimes.