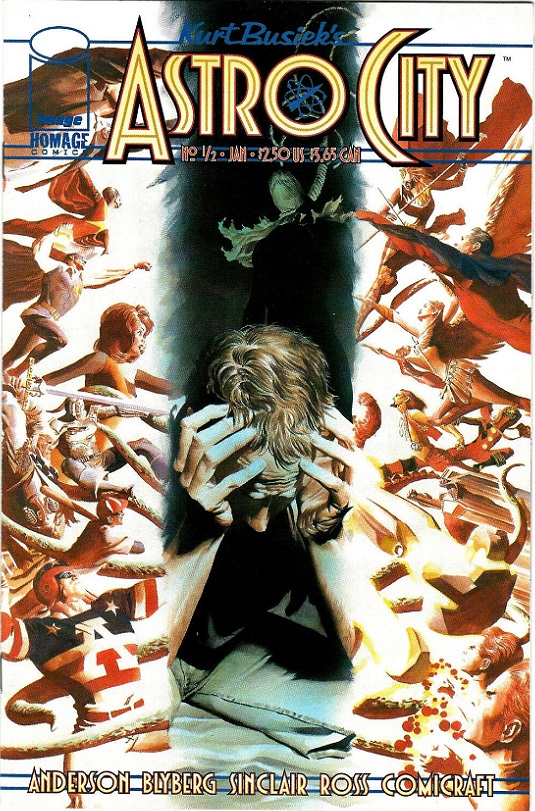 In 1996, the creative team of Kurt Buisek, Brent Anderson, and Alex Ross gave us their award-winning view of the concept of comic book crossovers as seen by the super-powered citizens of Astro City in the short story, “The Nearness of You.” This was found in a special mail order #1/2 issue produced by Wizard Entertainment.

Sporting a striking cover by Anderson and inker Will Blyburg, that isn’t exactly the one we’re talking about. For us, it’s all about the mainstream Ross cover that landed in comics specialty shops everywhere almost two years later in January 1998.

Featuring the guts of the original plus a short story by Busiek, this version carrying the Ross cover featured a magnificent frontispiece that had both fans and occasional readers swept up in the four-color crisis teased in the story. It also gave readers a first look at Ross’ interpretations of new heroes we hadn’t seen before. This included the Simon and Kirbyesque All-American and Slugger the Junior Dynamo, as well as the mysterious Lamplighter who readers would learn comes from the super-burg’s Museum Row.

Not to take anything away from the original release, the mainstream version offers a cover that commands your attention while simultaneously being a feast for the eyes. In fact, now that we look at it, the only “crisis” this book brings is if you don’t pick it up – and now!