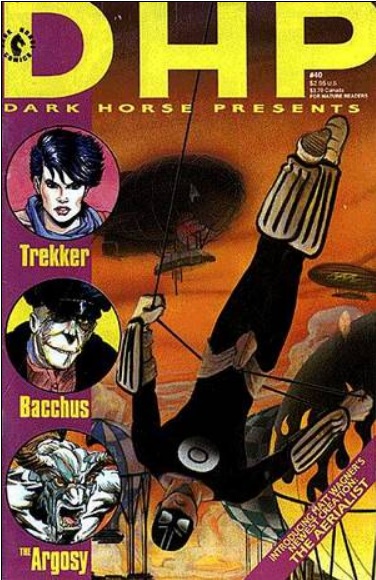 It was 1990 and the future seemed uncertain.

Freddie Mercury had just died of AIDS, and the big disease with the little name was on a lot of people’s minds. At the same time, Ellen DeGeneres had not yet come out and become open about her sexuality in public. But that wasn’t stopping Matt Wagner from tackling homosexuality – and thus turning heterosexuality on its head (literally) – via the introduction of his third and most controversial creator-owned franchise, The Aerialist.

Differing from both Grendel and Mage in pacing and tone, The Aerialist debuted in this particularly quiet landmark issue of Dark Horse Presents as Wagner’s strip shocked readers to a world above, where cities made up of futuristically designed zeppelins (called “aeries”) fielded deadly games of aerial martial combat. To keep population growth in check within Wagner’s skybound dystopia, homosexuality is the norm and heterosexuality is considered taboo. Grown from a test tube like his Spartan peers, the Aerialist starring in this minor epic finds himself lusting after an intriguing and desirable woman, something that could ruin his reputation, his sports rank as champion, and his very life.

Planned as an 80-page graphic novel, this dark tale only brought three chapters (24 pages) to print (inside of Dark Horse Presents #40 and #45 in 1990 and the Dark Horse Presents Fifth Anniversary Special a year later in ‘91), and, although tackling censorship and rampant homophobia at the time of its release, it ultimately succumbed to both. However, even as an unfinished black and white opus that its creator is quoted as saying will never be completed, The Aerialist – and this DHP cover that introduced it to the world – can still be considered poignant to this day.