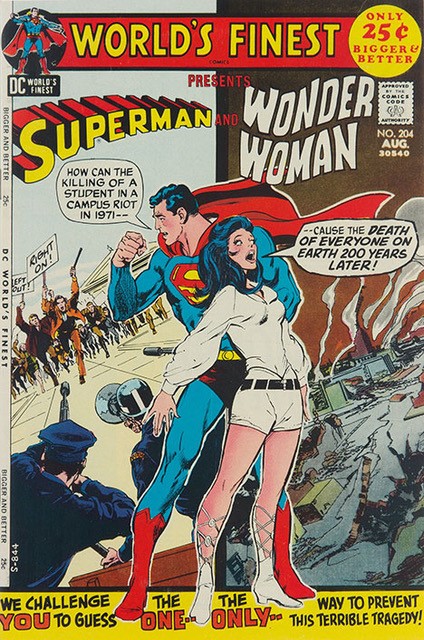 Title: “Journey to the End of Hope!”
Synopsis: Superman and a depowered Wonder Woman are swept into the future as a mechanical being tries to save the past.

Review: Underneath that gorgeous Neal Adams cover is a subpar story full of weak sci-fi tropes, awkward sexual (and sexist) tension, and dated slang such as “grotties” and “feebs.” While strangely enjoyable, this isn’t writer Denny O’Neil’s best outing. The art by Dick Dillin and Joe Giella is serviceable.

Title: “The Guardians of the Clockwork Universe!”
Synopsis: Captain Comet is recruited by a secret organization to stop an evil plot that imperils the universe.

Title: “The Rogue of 1,000 Ropes!”
Synopsis:  The Green Arrow and Speedy tangle with the Roper, a murderous villain with a penchant for, well, ropes.

Review: A silly villain brings little menace to what reads like a rejected Batman script (reprinted from Adventure Comics #176).

Grade (for the entire issue): C

Cool factor: That stunning Neal Adams cover.
Not-so-cool factor: Not much else, really.

Notable: This issue contains a “The Weird World of Aurora” ad featuring Vampirella.

Character quotable: “Diana … in another second or so, I’ll feel like kissing you – .” Superman, super awkward
A word from the editorial director: “We would like to thank you for buying this DC magazine even though it has cost you more than usual. But the fact that you bought it is what turns us on.” – Carmine Infantino, explaining the jump in cover price to 25¢, from an open letter to readers in this issue

Copyright ©2023 Off the Wahl Productions, all rights reserved. Each week, T. Andrew Wahl offers up a Bronze Age Minute. For more reviews like this one, check out Wahl’s website, offthewahl.com.