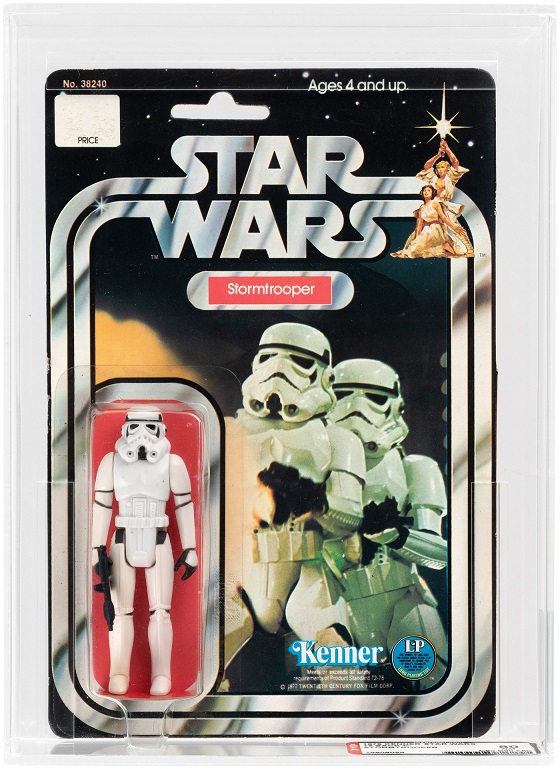 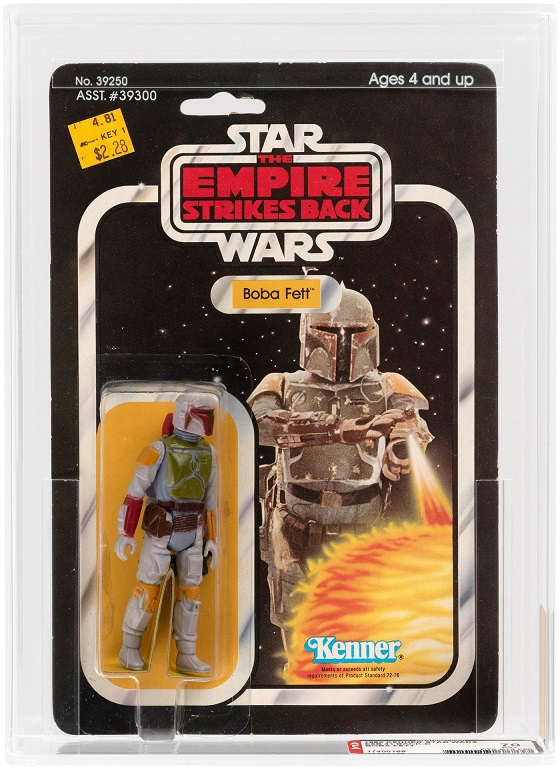 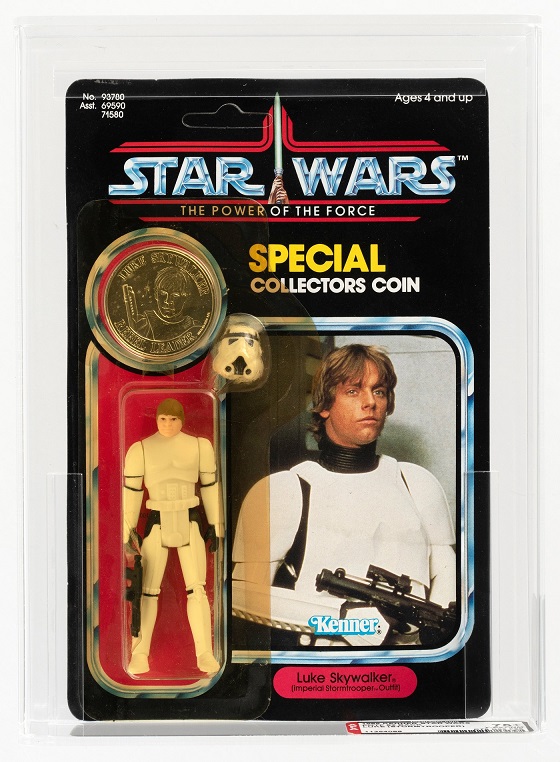 Over 400 lots of quality material are now open for bids in Hake’s online-exclusive Action Figures Auction. The Force is particularly strong in this auction as 200 lots of Star Wars figures anchor the sale.

The baddest bounty hunter of the original series is represented multiple time, including the Empire Strikes Back Boba Fett 41-back-D AFA 70 EX+ from 1980 on a punched card. Another is the Return of the Jedi Boba Fett 77-back with light aging wear and original price sticker on the card, the figure is Near Mint as packaged.

The auction also has several desirable figures from Power of the Force. This final line of original Kenner figures were released in 1985 and come with aluminum collector’s coins. They include Luke Skywalker (Imperial Stormtrooper outfit) 92-back AFA 75+ Y-EX+/NM, Han Solo (carbonite chamber) 92-back AFA 85 Y-NM+, and Barada 92-back AFA 90 Y-NM+/MT. Others are the EV-9D9 92-back AFA 85 NM+ and the Amanaman 92-back AFA 85 Y-NM+, both of which stand 4-1/2” tall (slightly taller than the usual 3-3/4” figures). Each of these are on unpunched cards.

Two other first series figures getting early attention are the Star Wars Han Solo (small head) 12-back-C AFA 70 EX+ on partially punched card with hang tab still attached and the Artoo-Detoo (R2-D2) 12-back-C AFA 75 EX+/NM, which stands 2-1/4” and is on a punched card.

Two key figures from the Empire Strikes Back lines are the Luke Skywalker (Bespin fatigues) 31-back-B AFA 75+ EX+/NM and Yoda 41-back-D AFA 80 Y-NM (brown snake variety) that stands 1-3/4”. Both are on unpunched cards.

Two international figures come from Mexico’s 1983 Lili Ledy Return of the Jedi line. They are a Han Solo on 50-back card with a resealed blister with color touchup around reseal and clear tape across the top of card over the peg hole. The other is Chirf-Chirpa on card with color touched up with blister firmly attached.

All items in this auction start at just $9.99. The auction went online Monday, November 16 and closes Tuesday, December 1, 2020 at hakes.com.