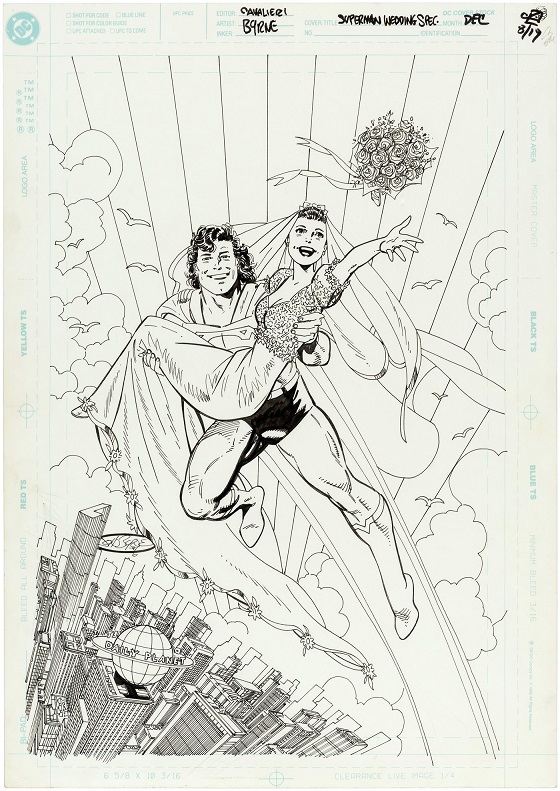 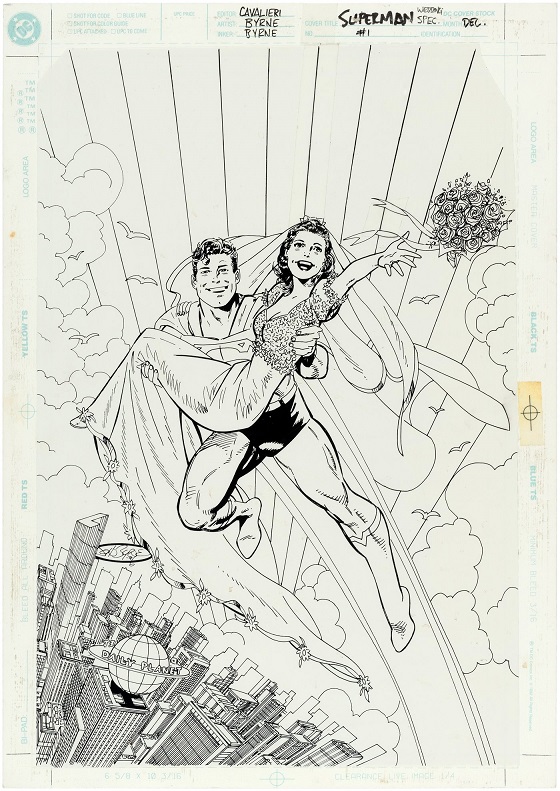 Superman has had many important moments in his over 80-plus years in comics, with his wedding to Lois Lane ranking highly among them. Now, fans of the Man of Steel and the intrepid reporter have the opportunity to bid on the Superman: The Wedding Album #1 original comic cover art by John Byrne in Hake’s Auction #232. Not only is this piece significant among Superman covers, it is also special for the edits Byrne made to the final version.

Since Superman and Lois Lane were introduced in Action Comics #1, there have been multiple fantasy stories about the pair exchanging vows. It wasn’t until Dan Jurgens wrote Superman: The Wedding Album #1 (December 1996) that the pair were officially united in matrimony. The special one-shot featured the work of several popular Superman artist with a cover by John Byrne who illustrated the pair flying over Metropolis.

The 12” x 17” artboard with pen and ink art for the newsstand cover has Byrne’s initial design with Superman sporting the long hair he had during most of the 1990s and Lois’ veil covering most of her hair. Popular landmarks like the Daily Planet and the LexCorp Tower appear in the background. In this issue, Superman cut his hair before the wedding, so editor Joey Cavalieri asked Byrne to alter his hair style on the cover.

A second 11” x 17” artboard features Byrne’s updated original art with Superman’s shorter hair and Lois’ veil situated in a different position that makes more of her hair visible. Byrne added a hand-written note on this piece that reads, “Here ya go, Joey. But if you suddenly decide he’s got to have ponytails, I ain’t doin’ it!!!” with his signature underneath.

The consignor obtained the art shortly after it was created, and it has remained in that collection. Now, the fresh to market piece is being offered for the first time in nearly 25 years. The auction closes on June 29-30, 2021, on hakes.com.