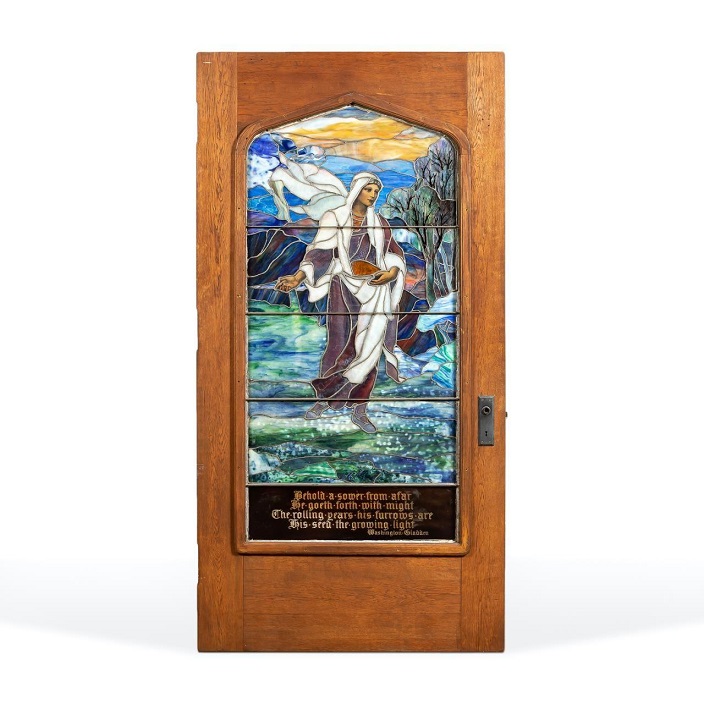 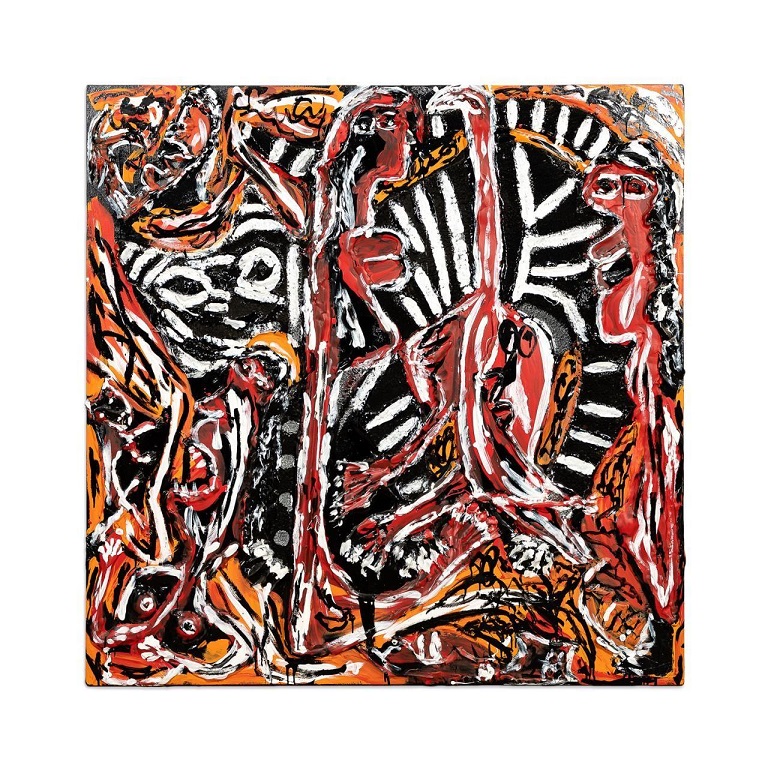 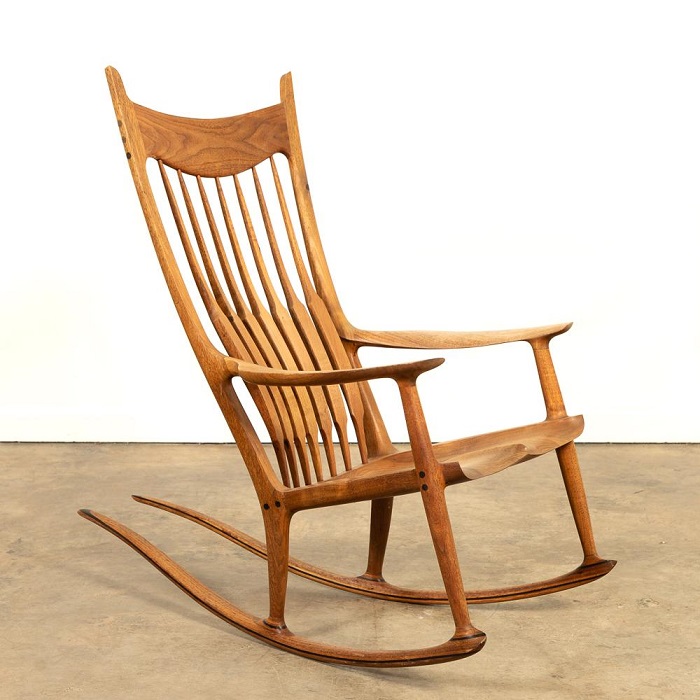 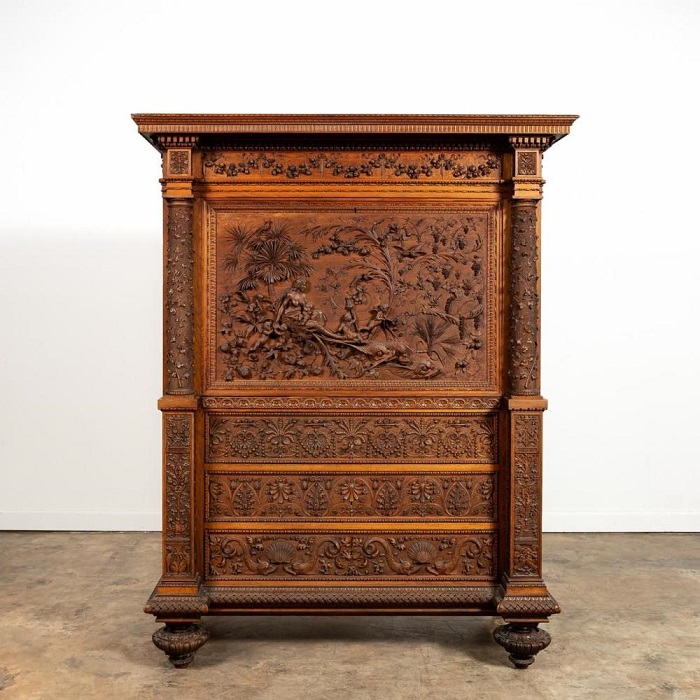 A Tiffany Studios Favrile glass door from the 1920s titled The Sower, an original painting by Thornton Dial (American, 1928-2016) titled Struggling Tiger (1991), and a stunning Lalique cactus crystal center table designed in 1951 are just a few of the expected top lots in Ahlers & Ogletree’s three-day, three-session auction slated for January 14-16, 2022.

There will be no in-person bidding in the New Year’s Signature Estates Auction, but bidders can register at one of the three popular online platforms: LiveAuctioneers.com, Invaluable.com and Bidsquare.com. Phone and absentee bids will also be accepted. In-person previews will be held (no appointment required) January 10-12 from 10 AM to 5 PM, and on Thursday, January 13 from 10 AM to 6 PM.

The Tiffany Studios leaded and plated Favrile glass panel in oak door is the auction’s expected top lot, with a robust presale estimate of $50,000-$100,000. It was originally commissioned by Melville Dewey (of the Dewey decimal system) as one of two doors to be installed in the Annie Dewey Memorial Chapel in Lake Placid, New York, in 1923 and dedicated to Dr. W.G. Russell.

It was the left door, showing a female as The Sower. The accompanying right door (not in the auction) depicted a male figure and was titled The Seer, by Grosvenor Dawer, Limited Club Edition #30, with Dewey’s signature. The door in the auction was likely designed by Mary Elizabeth Tillinghast (1845-1912). Overall, it measures 84 inches tall by 42-3/4 inches wide.

The Thornton Dial painting – full title Struggling Tiger (The Tiger Penned In) – is a paint and mixed media on canvas backed with panel and is titled on verso. The work is 60 inches by 60 inches and should reach $30,000-$60,000. This spectacular and large example of Dial’s work was acquired from William Arnett in 1993. Dial was a pioneering artist who came to prominence in the late 1980s. Ten of his works were acquired by the Metropolitan Museum of Art in 2014.

The Lalique center table was designed in France by Marc Lalique himself. The “cactus” form, colorless crystal table with a round glass top, chrome support and a frosted base is expected to change hands for $20,000-$30,000. It has a frosted mark to the foot and measures 60 inches in diameter (top) and 28-3/4 inches in height. Creations by Lalique are highly prized by collectors.

There are three important and noteworthy furniture lots in the auction. They include a carved Italian Renaissance Revival walnut secretary desk by Luigi Frullini (Italian, 1839-1897), who’s often called the Donatello of wood carvers. Examples of his work are in many fine museums worldwide (estimate: $30,000-$50,000). A walnut rocking chair with ebony accents by Sam Maloof (American, 1916-2009), signed and dated (1993). Similar rockers by Maloof can be found in the White House Collection of American Crafts, the Smithsonian, elsewhere (estimate: $25,000-$35,000). A rare, well-carved Renaissance Revival ebonized and holly (or satinwood) accented cabinet secretary desk, made circa 1874-1876 by The Wooten Desk Company (American, 1870-1893), previously owned by the President of Uruguay (estimate: $15,000-$25,000).

Decorative accessories will be offered in abundance and will include a koi glass mosaic in a patinated copper dragonfly relief Art Nouveau frame by Steven Stelz (American, 20th/21st century), titled Koi Pond with Lily Pads (1995), signed and dated, 44-1/4 inches by 24-1/4 inches (frame size) (estimate: $10,000-$15,000). Two large allegorical porcelain figures by Meissen (German, founded 1720), depicting Day and Night, originally modeled by Heinrich Schwabe (1847-1924), each figure about 21 inches in height and both perched on gilded dome bases (estimate: $5,000-$7,000). An antique Chinese jade and semi-precious stone round silvered metal hand mirror, decorated with the eight Buddhist symbols, the handle flanked by a bat motif and having a carved jade center medallion, unmarked, about 8 inches long (estimate: $500-$1,000).

Ahlers & Ogletree is always seeking quality consignments for future auctions. To consign an item, an estate or a collection, call them at (404) 869-2478 or can send them an email to consign@AandOauctions.com.