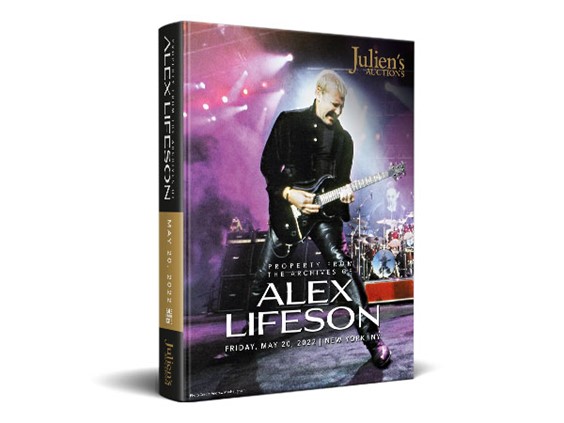 On Friday, May 20, 2022, Julien’s music icons auction in New York City will feature the Property from the Archives of Alex Lifeson. The special portion of the auction will include over 60 vintage guitars and other memorabilia from the Rush guitarist’s personal collection.

The auction includes a 1976 custom built Gibson ES-355TD that Lifeson played throughout most of his career with Rush. It is featured on the albums A Farewell to Kings to Test for Echo, and he played it on stage from 1977 to 2015.

There’s a 1980 custom Hentor Sportscaster that he played as the main guitar on Grace Under Pressure. It was one of his favorites and can be seen in the music videos for “Vital Signs,” “Countdown,” and “Enemy Within.”

Highlights also include a 1970 Gibson Les Paul that he got during Rush’s first tour, played on several albums, and used on the “Fly By Night,” “2112,” and “Hemispheres” tours. There’s a ’71 Jose Ramirez acoustic guitar that he used on the Hemispheres album for songs like “The Trees” and “La Villa Strangiato.”

Julien’s is offering a ’76 Gibson Dove acoustic guitar he played on several tours and to write the song “Closer to the Heart” on the A Farewell to Kings album. They also have a ’76 Gibson J-55 acoustic guitar he used to compose the 2112 and A Farewell to Kings albums and an ’81 Gibson Howard Roberts fusion guitar that was his main guitar on the “Moving Pictures” tour.