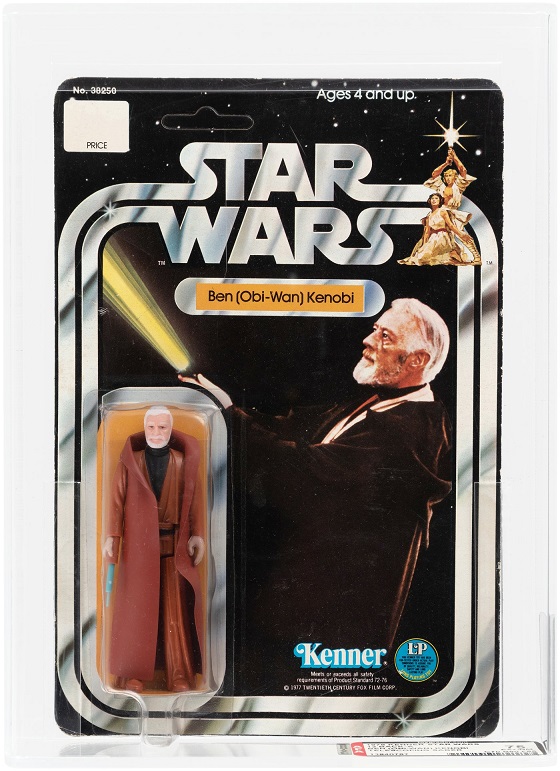 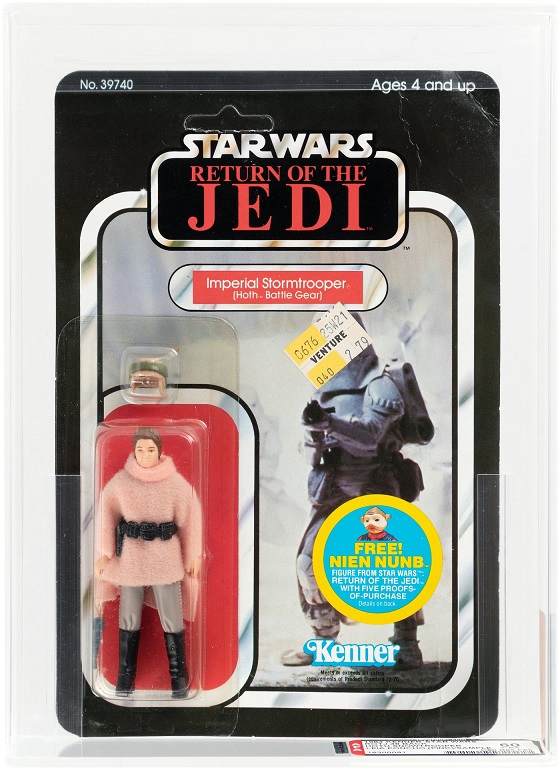 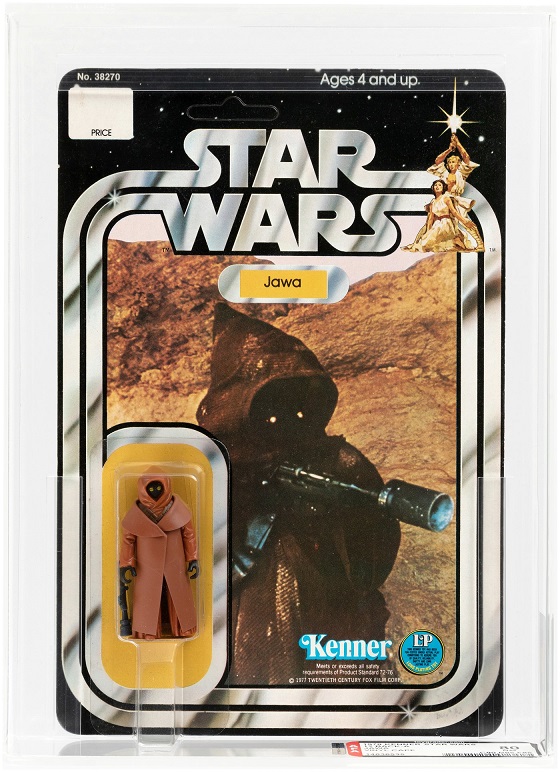 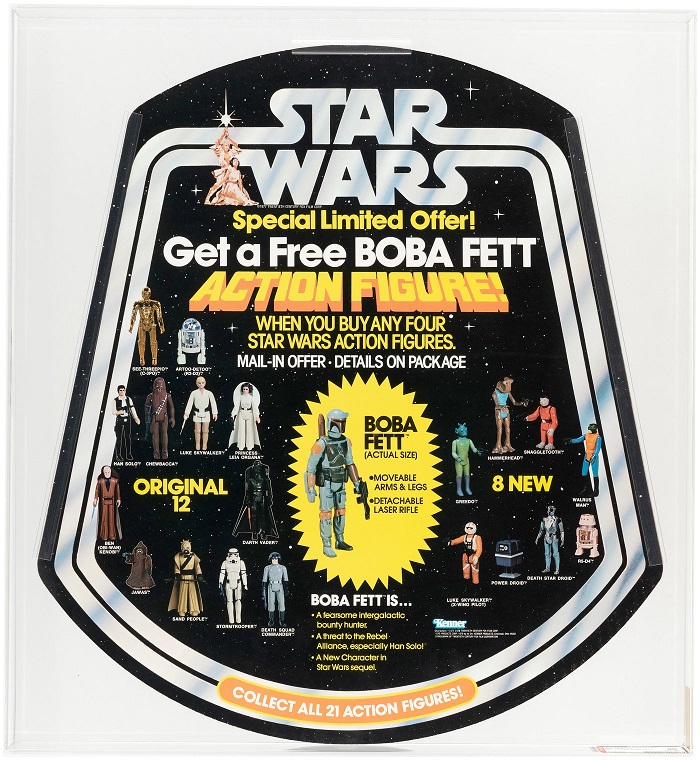 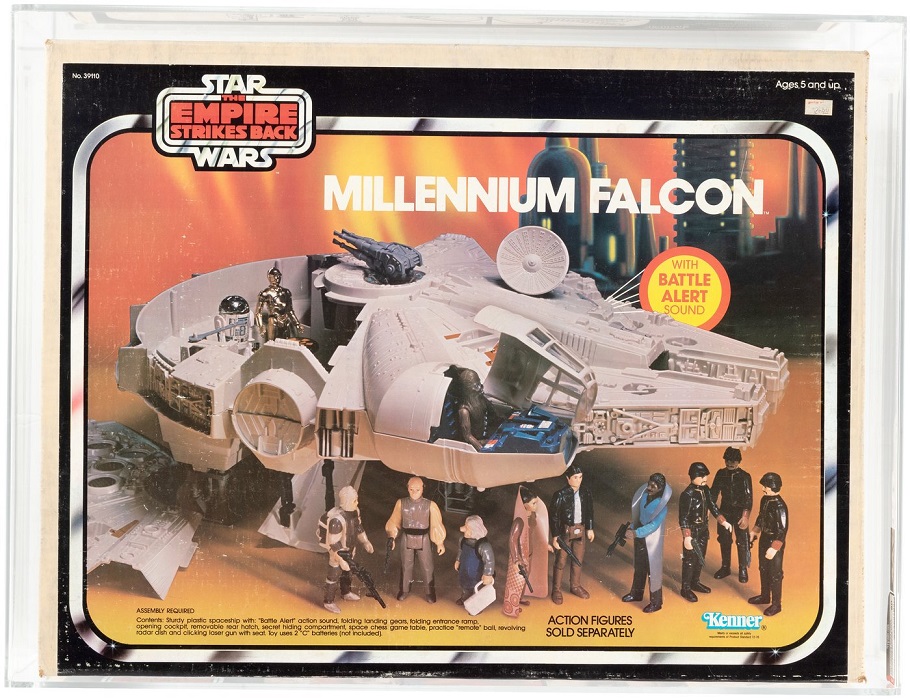 Hake’s premier Auction #236, featuring a plethora of pop culture and Americana collectibles, ended with a $2.4 million total. When the auction closed on November 15-16, 2022, it was clear that once again Star Wars memorabilia produced robust results.

The Ben (Obi-Wan) Kenobi 12-back-A AFA 75 (double-telescoping/SKU on footer) sold for $79,178. The 3-3/4” tall figure comes with the double-telescoping lightsaber that has a second extendable piece. Kenner only produced three figures with that feature – Luke Skywalker, Obi-Wan Kenobi, and Darth Vader – before the lightsabers were modified to cut costs and manufacturing issues. This figure is additionally packaged with the SKU on the footer and the card is unpunched.

The Return of the Jedi Princess Leia (pink poncho sample) on Hoth Snowtrooper card 48-back AFA 60 realized $42,834, well over the $35,000 estimate. The 3-3/4” tall figure of Leia is wearing a solid pink poncho instead of the camouflage poncho that was issued on the final production. The figure is attached to an Imperial Stormtrooper/Snowtrooper (Hoth battle gear) card, which is partially punched but the hang tab remains in place.

One of the top action figures was the Jawa 12-back-A AFA 80 vinyl cape variety that cleared $27,126. This early version of the figure was issued before the cape was replaced with one made of cloth. It is on an unpunched card.

A pair of Empire Strikes Back prototypes are offered, including an IG-88 12” Series painted hard copy that hammered for $23,558. The 15” tall prototype has been painted in a color scheme close to the final production paints, minus the black accents. The Han Solo 12” series figure has unproduced Hoth Battle Gear prototype outfit, which includes the outer jacket, scarf, and gloves reached $15,930.

The “Get a Free Boba Fett Action Figure!” bell hanger advertising store display sign AFA 90 went for $8,437. The 18” x 20-1/4” double-sided cardboard hanging sign showcases the first 12 action figures, along with the eight new figures that were set to be released. This version of the sign has a central image of the “actual size” Boba Fett figure.

A pair of Revenge of the Jedi proof cards surpassed their preauction estimates, starting with the Princess Leia Organa card AFA 85 that sold for $8,024. The Luke Skywalker (X-wing fighter pilot) card AFA 85 brought $6,785. The unpunched cards feature the Revenge title that was used before the movie was officially named Return of the Jedi.

All prices include an 18% buyer’s premium. All of the top results in Part I and Part II can be viewed on Hake’s website.