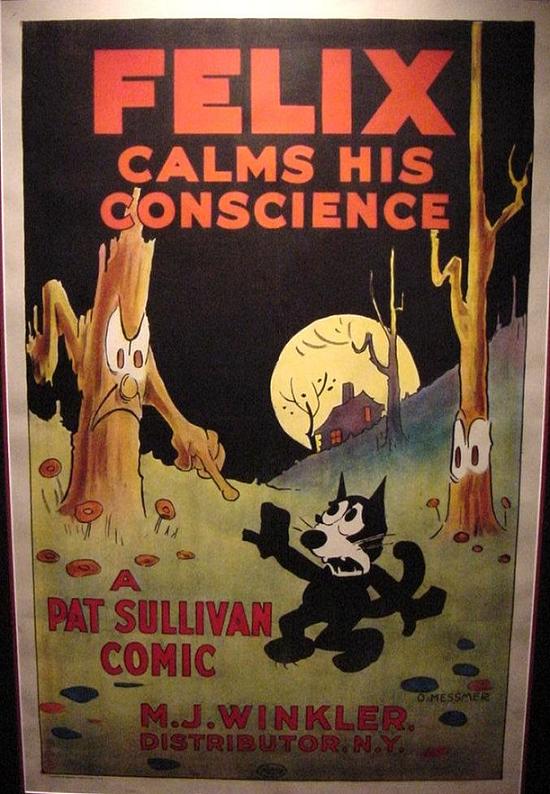 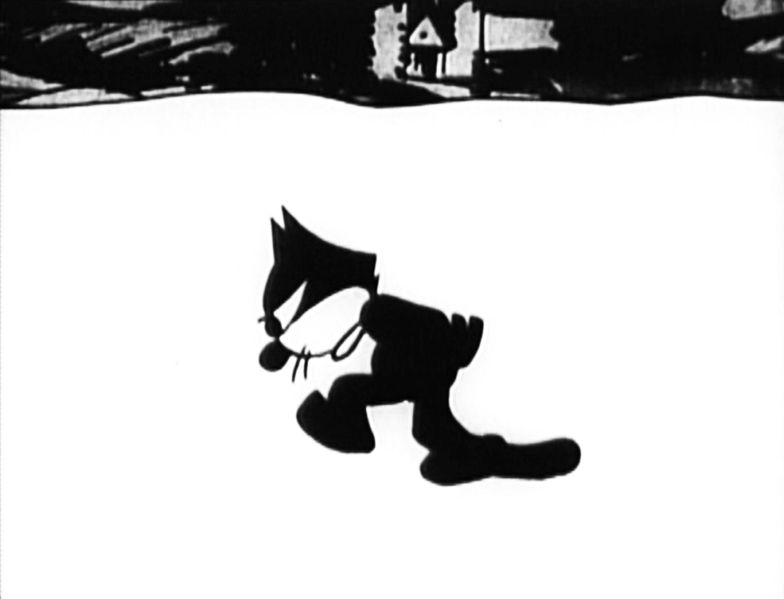 His big eyes, giant grin, genuine charm, and affinity for surrealism made Felix the Cat an unforgettable animated star. He gained phenomenal success during the 1920s through films, comic strips, merchandise; basically, anything and everything related to pop culture, giving this cartoon star a pretty comfortable life. Even his name is the embodiment of happiness and luck. “Felix” derives from Latin in two ways: the Latin word “felis” means “cat” and “felix” means happy and lucky. How could he not have been a star?

Felix introduced audiences to a new dimension of film. While they enjoyed silent film stars, such as Felix’s mentor Charlie Chaplin, those stars were limited in what they could and could not do. Felix broke out as a character with minimal boundaries. Audiences could watch him scoop ice cream out of a cloud while wooing his love, meet prehistoric creatures, or duel lightning. His limitations were endless, whetting the imaginative appetite of any viewer.

Though Felix was a silent star, plenty of personality and attitude came through. He was funny, feisty, and got into trouble, yet was still loveable. He rebelled against prohibition, hanging out in Speakeasys, and pointed out the flaws in the way the American government handled hard times in the Jazz Age, declaring it the “Garb-Age” while digging through the trash for food. With storylines like these, Felix connected to his audience, making them laugh, but also sharing their hardships through war, through their insecurities, through it all.

Living the life of a 1920s rock star, Felix made his way around the world. His cartoons crossed the ocean to Europe, then Felix himself attempted the feat. It is often wrongly reported that Charles Lindbergh carried a Felix the Cat doll with him during his world-changing Trans-Atlantic Flight from New York to Paris. In actuality, Felix was taken with avaitrix Ruth Elder, the first woman to attempt a solo flight across the Atlantic, five years before Amelia Earhart. For luck, she took a Bible, a Chinese ring, and a stuffed Felix doll.

Luckily, after the plane crashed in the Atlantic Ocean, Elder was rescued; unfortunately, Felix was not. Knowing that Elder had lost her lucky Felix the Cat stuffed doll, Pat Sullivan, owner of the studio Felix the Cat was produced for, sent her a message stating, “Am all right. Swam ashore. Will see you soon – Felix.” A few weeks later, Elder received a new Felix doll in the mail, posed for newspaper photographs and claimed that, “Luck saved me.”

His personality, from writers to artists, and marketing genius from his production company, made Felix the first genuine animated superstar.